Home   |   Where does FGC happen?   |   Uganda
View all regions
View all countries

Due to the low overall prevalence of FGC in Uganda, data is limited. It is thought, however, that where girls are cut the practice typically takes place over the age of ten.

Illegal. National legislation was passed in 2010 that prohibits FGC in Uganda, and carries a maximum penalty of life imprisonment.

The UNFPA-UNICEF joint programme on FGC operates in Uganda. 105 communities made public declarations of FGC abandonment involving more than 27,407 individuals during Phase II of the programme (2014-2017).

It reports that important progress is being made and has high level political backing. In terms of attitudes, 82% of girls and women aged 15 to 49 years have heard about FGC and now think the practice should end.

In general, the 2010 anti-FGC legislation has not been strictly enforced in rural areas, where prevalence remains highest. Few successful cases have been through the courts and travel across national borders to avoid prosecution presents a significant challenge.

Across all six districts, the prevalence of FGC in Uganda is highest among women aged 45 years and above (68%), indicating that rates are decreasing.

Despite a low prevalence across the country as a whole, there are areas of localised practice. Studies show higher prevalence rates in the Karamoja region in the north-east, including the districts of Moroto (52%), Nakapiripirit (49%) and Amudat (42%). Meanwhile, in the Sebei region, the prevalence was highest in the Bukwo district at 28%, followed by Kween at 21% and Kapchorwa, 13%. 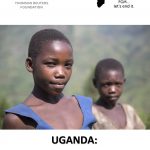 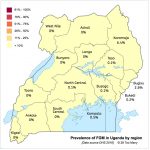 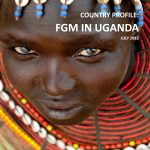 The Speaker of Parliament calls on all Ugandans to join the fight against child marriages and FGM, All Africa, December 2016 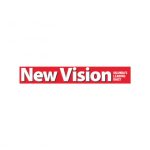 FGM Bill to be introduced in Uganda, New Vision, July 2016 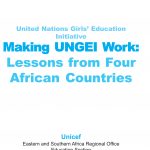 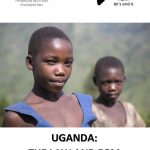 Uganda: The Law and FGM