Home   |   Where does FGC happen?   |   Guinea
View all regions
View all countries

The most widely practised form of female genital cutting (FGC) in Guinea is Type II. Types I and III are also practised and Type IV is beginning to be practised by some families.

In Guinea, two thirds of the girls undergo FGC before the age of nine.

68% of FGC in Guinea is carried out by traditional practitioners; 31% by trained health providers.

Illegal. Legislation specifically prohibiting FGC was passed in 1965 and strengthened in 2000 and 2016. The law is rarely enforced, however.

The UNFPA-UNICEF joint programme is active in all regions of Guinea. In the programme’s second phase (2014-2017), 2,093 public declarations of FGC abandonment were made. These included declarations by 482 communities, involving more than 635,616 individuals, in 2017.

The UN reports that progress towards change in attitudes and practice is negligible.

FGC prosecutions appear to be rare in Guinea.  A small number of cases have been reported since 2010, but it seems that only suspended sentences and/or small fines resulted when these went to court. The judiciary is reportedly under pressure from communities who wish to continue the practice.

Medicalisation of FGC is increasing, despite the fact that current legislation applies maximum penalties for FGC carried out by a member of the medical profession.

FGC among adolescent girls shows a prevalence rate similar to that of older age groups of women, suggesting little change in FGC practices in Guinea.

In the vast majority of regions, the prevalence of FGC among women aged 15-49 is over 99% and the Labé region in the north has a rate of 100%.  N’Zérékoré, located in the south-east, has a slightly lower prevalence, at 87.1%.

Source: UNICEF, based on MICS 2017, UNFPA-UNICEF 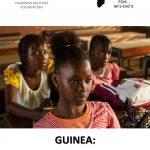 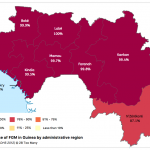 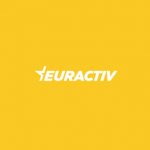 FGM on the rise in Guinea. Girls being cut at younger and younger ages, UN Human Rights, April 2016 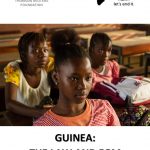 Guinea: The Law and FGM