Home   |   Where does FGC happen?   |   Eritrea
View all regions
View all countries

The most widely practised forms of female genital cutting (FGC) in Eritrea are Type I and Type III.

FGC in Eritrea is often practiced on infants. Almost half of women aged 15-49 (47%) underwent FGC before they reached one year. 11% of them underwent FGC between the ages of one and four years.

Traditional practitioners and birth attendants performed FGC in 92% of cases.

Illegal. An anti-FGC law has been in place since 2007.

The UNFPA-UNICEF Joint Programme on FGC is active in Eritrea. They report that attitudes to FGC are steadily changing. From 2002 to 2010, the proportion of women aged 15-49 who felt FGC should be abandoned increased by approximately 69%.

In the second phase of this programme (2014-2017), 291 communities made public declarations of FGC abandonment involving more than 480,000 individuals.

Information on the enforcement of anti-FGC law is limited.  While numerous cases may have reached court, the conviction rate is relatively low.

Prevalence of FGC in Eritrea is inversely correlated to increasing levels of education and wealth. The central north regions have the highest prevalence rates: Semenawi Keih Bahri (95.4% of women aged 15-49) and Anseba (95.9%). 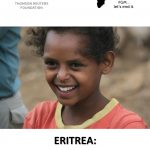 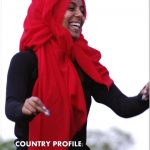 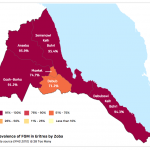 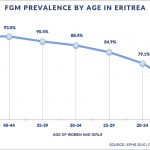 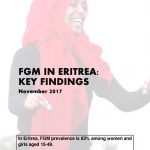