As you read this, there are 4.1 million girls at risk of undergoing female genital cutting (FGC) in the next 12 months.

This figure is, without doubt, an underestimate of the true global figure, as it is based on statistics from the 27 countries that collect data in Africa, Yemen, Iraq and Indonesia. However, we know that women and girls in many more countries live with the impacts and the prospect of being cut.

Cutting happens in countries on every continent except Antarctica, we have numbers for 30. This is a global issue. Cutting affects girls and women across class, race, level of education, wealth, nationality, and religion.

If a girl is cut, then her chances of her going to school is reduced, she is likely to be married before the age of 18, she is twice as likely to die in child labour. It is a violence against her human rights, and it requires a global response.

If we flip that on its head, bringing an end to female genital cutting globally would mean millions of girls’ lives, and their communities, would be transformed. The potential to change outcomes for girls and women affected is astonishing. The question is, how do we do it?

Again and again, I have been struck by the fact that parents who cut their daughters, as difficult as it might be to confront, only want the best for their children, as all parents do.

Since taking up my new role as CEO of Orchid Project, I’ve been reminded of something which I first understood working for Marie Stopes International while visiting Iringa, Tanzania, in 2007.

I was in a clinic sitting with a group of women who were waiting to get contraceptives for the first time in their lives. A young woman next to me whose name was Zawadi and was perhaps 25, was about to go in to the nurse. She had her young son on her lap, and as she got up she said to me, “Please, take him.”

I responded by saying, “Yes, of course, I’ll look after him while you talk to the nurse.” and she said, “No, I mean take him.”

In that moment, I was completely shocked. Zawadi wanted me – a stranger- to take her son, I assumed because she felt that I would be able to provide better life chances than if he stayed with his own family.

For many, this wouldn’t bear thinking about. But I saw that as a parent she was willing to sacrifice being with her son because of her perception that he could have a better life elsewhere. She just wanted the best for him in this world, no matter the cost to herself.

This is something that has kept coming back to me in the last few weeks, since I joined Orchid. Again and again, I have been struck by the fact that parents who cut their daughters, as difficult as it might be to confront, only want the best for their children, as all parents do, and as Zawadi did.

Understanding this is absolutely key as we work to end this harmful practice. We must approach it without judgement, because that is the only way we can break the silence.

The world has the aim of ending FGC by 2030. I want to look back in just over 10 years and be able to say, we did it. And if you’re reading this, you have a part to play.

The solutions we support must come from within the communities affected – from the parents, young people, health workers, teachers and religious leaders who have a stake in whether FGC continues, or not. 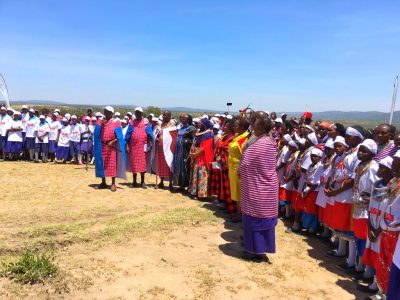 3,000 Maasai gathered in Loita Hills, south Kenya, to witness the blessing of an Alternative Rite of Passage to cutting, brought about by the work of our grassroots partner SAFE Maa.

We’ve already seen that grassroots supported dialogue led by communities can stimulate transformative action when it comes to female genital cutting. What we need to do now is to bring that to scale, for the 3.9 million girls at risk in the next 12 months, and the girls that are still uncounted.

The world has the aim of ending FGC by 2030. I want to look back in just over 10 years and be able to say, we did it. And if you’re reading this, you have a part to play.

Let’s use our voices and our collective power to build on the incredible movement that has gone before, that is growing every day, and create a legacy for the betterment of all girls’ and for all future generations.

Donate to support an end to female genital cutting