My name is Veronica Leluata. I’m 28 years old, I live in a rural community called Samburu in south Kenya and I’m married with one baby girl, who is 9 years old.

I was born in Samburu and have lived here my whole life. Before I got married, I was a pre-school teacher in a place called Sukuroi in Samburu for 6 years. This is where my passion for education started – and I where I saw the importance of going to school for our community.

In Samburu, I’ve seen the many problems that the kids were going through. Here, around 90% of people cannot read or write. Most people’s livelihoods come from agriculture, but education is important for the whole community’s wellbeing. It’s important to keep the whole community safe, to understand our rights and our responsibility to uphold them.

My story is one of at least 200 million stories of survivors of this practice globally. This is what spurs me on to create change. 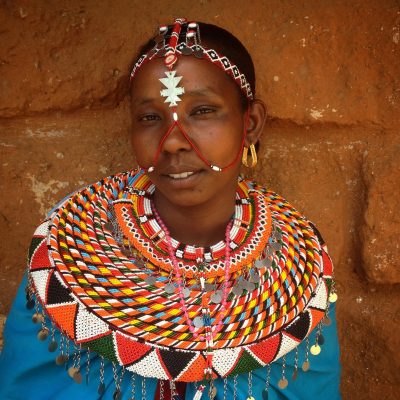 Another problem I see is that the girls in Samburu undergo female genital cutting (FGC) when they’re around 12-13 years old, something I underwent myself when I was a girl. Cutting is a practice that is deeply ingrained, and something the community hold dear because it is seen as tradition.

Parents have their daughters cut because they believe it is the best thing to secure her future, and because the community expects it. People believe that if a girl is not cut, she cannot be seen as an adult. She cannot be married or join society, which means she will not be supported or have a livelihood. This is why it continues.

But FGC can have severe and long term consequences for a girl, lasting well into her womanhood; from dropping out of school, to infections, problems menstruating and problems in childbirth.

I know this well myself. When I was pregnant with my second baby, I had a prolonged delivery. I was in hospital and on the third day there I was rushed into an operation, but the doctors could not help and I lost my baby.

My story is one of at least 200 million stories of survivors of this practice globally. And we do not know how many stories that have gone untold of the girls and women who have lost their lives to cutting.

This is what spurs me on to create change, and my passion for education and ending FGC has led me to working with my community to do just that. 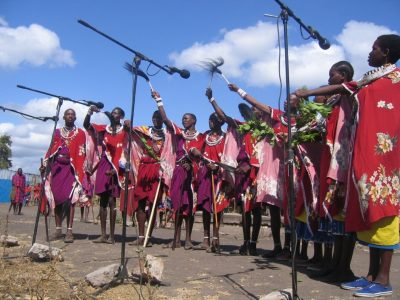 When I heard about S.A.F.E.’s work, I knew I wanted to be part of it. Performers from SAFE Maa, the Maasai team of the organisation, came to Westgate, which is a conservancy in Samburu county where I live. As I watched and listened, I heard traditional Maasai songs, but they were sharing new messages about human rights and ending FGC. Having seen the problems in my community, and experienced the negative effects of cutting, their performance inspired me and others in my community to set up SAFE Samburu. Now we work within the community, talking about safety, child rights and the impacts of FGC.

We partner with Orchid Project, who support our work here at the grassroots, where we hold workshops that give people space to talk about cutting, and other issues, in a non-judgemental way. As a Project Manager with SAFE Samburu, I lead workshops with the community and I’m excited to see that, slowly but surely, change is happening.

In March, Orchid Project held a Knowledge Sharing Workshop (KSW) in Samburu with eight neighbouring community-based organisations, which I co-facilitated. We shared our experiences around FGC and talked about UNICEF’s Six Elements of Abandonment of FGC, which is a best practice framework that explores a social norms-based approach to ending the practice.

Before, they would never speak up. Now they are saying that if they had the power, they would stop girls undergoing the cut.

Going through each element, we discussed how we are currently working in our communities to end cutting, the challenges, and how we can use this best practice model in our programmes. 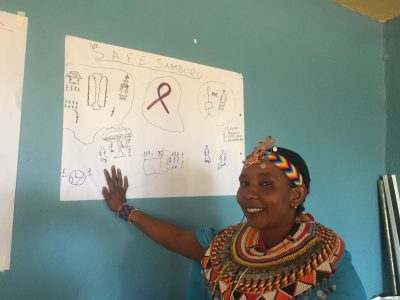 There were more men than women at the workshop, which definitely highlighted a challenge as, in male dominated spaces, women often find it hard to speak up. It’s important for women to be able to speak in public forums, especially on issues like cutting, and to have the men understand our experiences and to support working together.

Lots of the men in the workshop were surprised when they heard our experiences of cutting and how it has affected our lives. They had not heard these problems before, and this is similar to how it is in the community. It is an issue in Samburu that women cannot easily share their problems and men don’t listen in the family.

But this is something SAFE Samburu is changing. I’ve seen in the community workshops that I facilitate that women are starting to speak up more. Before these workshops, they would never speak up. Now they are saying that if they had the power, they would stop girls undergoing the cut. Other people are saying the same; the morans (young male warriors), girls, even elders in the community are saying that a time will come when they will talk about how we can end FGC.

Hopes for the future

Ending cutting in my community will take time, but I am committed, and I am confident that it will end in Samburu. Because of the work we are doing, more people are enrolling in school programmes. I think this is key, because if more people are aware and get an education, the more people will want to leave cutting behind.

I’m determined to end the cut in my community, and to spread that change far and wide.

I also have high hopes for the youth generation because they are saying they do not want to harm their daughters; they do not want to have them cut. We need time and support to continue to have open conversations where people feel safe to express their thoughts and experiences of FGC. This is happening more and more, and I think it’s only a matter of time until we end the practice.

I’m determined to end the cut in my community, and to spread that change far and wide. My dream is to end FGC in Samburu community. It will happen and I will be remembered for that.

This blog was produced in partnership with S.A.F.E. through a telephone interview with Veronica Leluata, Project Manager and founding member of SAFE Samburu.