Home   |   News & Stories   |   A marathon, not a sprint: partnerships are essential to reaching the finish line in ending female genital cutting (FGC) 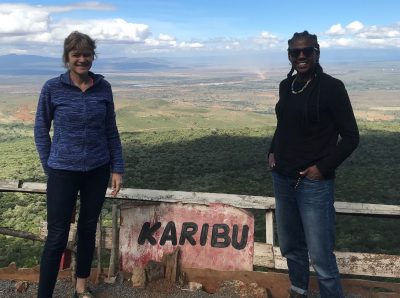 One of the perks of being a global women’s rights advocate is getting to travel to beautiful countries like Kenya, which is where I found myself earlier this month for the Nairobi summit to mark 25 years since the International Conference on Population and Development (ICPD).

The ICPD +25 conference – thanks to masterful steering of proceedings by the governments of Kenya and Denmark, and the UNFPA – was host to a vast array of pledges; including 1,200 stand-alone commitments to improving sexual and reproductive health, $1 billion in government funding and $8 billion in private-sector pledges.

Significantly, President Uhuru Kenyatta of Kenya re-affirmed his pledge to end FGC in Kenya by 2022. National prevalence of FGC has reduced in Kenya in over the last 20 years, from 40% in 1998, to 21% today. We can see that though progress is steady, ending FGC takes time; it is a marathon, not a sprint. But like the incredible Kenyan athlete Eliud Kipchoge, who recently broke a world record by running a marathon in under two hours, Kenya has set its sights on being the first over the finish line in ending the practice. More on how that goal will be achieved later…

All of these resources and expressions of political commitment will be critical to enabling progress in achieving the bold vision of the UNFPA Executive Director, Dr. Natalia Kanem, in achieving “the three zeros”: zero unmet need for family planning, zero preventable maternal deaths and zero gender-based violence and harmful practices.

The work Orchid Project does to end female genital cutting plays a key role in contributing to two of these three zeros: FGC is not only a form of GBV and a harmful practice, it also has evidence-based impacts on maternal health outcomes. WHO research has shown that women who have undergone FGC are more likely to suffer complications such as caesarean sections, severe bleeding after delivery or loss of their newborn baby. Additionally, the Population Council has reviewed the available evidence linking FGC and fistula, which also has potentially severe implications for women during childbirth, stating that there is a plausible link.

Like Kipchoge, I need people to run with me to achieve the 2022 vision of President Kenyatta to end FGM.

Many of our colleagues across the sector working to end FGC applied to run concurrent sessions during the summit, but were unsuccessful. Us included. But we were undeterred! We decided to organise our own side event on the first day of the summit, right before the opening session. In collaboration with Amref Health Africa, Tostan and the Coalition on Violence against Women (COVAW), who are one of our Kenyan partner organisations, we set about ensuring ending FGC was indeed recognised as a core goal in achieving the ICPD vision. Despite the challenging hour – we started at 6.30 am – many of our friends came out to enjoy breakfast, inspiring discussions and networking – the support within the sector is so sustaining and enriching.

Firstly, we heard from Bernadette Loloju, CEO of the Kenyan Anti-FGM Board, speaking on behalf of the Cabinet Secretary for Public Service, Youth & Gender Affairs, Prof Margaret Kobias. She shared some specific insights on why the practice is sustained at the community level – mainly because in places where economic opportunities are lacking, FGC is seen as a way of protecting girls from economic and social risks by ensuring their marriageability. Bernadette also outlined how President Kenyatta had recently met elders from 22 hotspot areas and shared his commitment to ensure zero FGC by the end of his term. She described how a national policy for the abandonment of FGC had been launched at this elders’ meeting, and shared some key elements of this policy.

Key actions to be taken by the Kenyan government to achieve President Kenyatta’s 2022 vision: 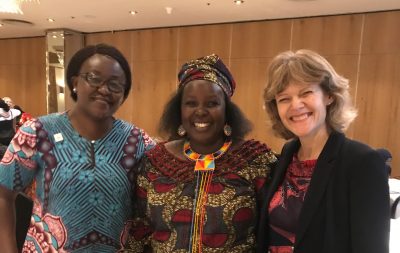 We then heard from Nafissatou Diop, Coordinator and Senior Adviser for the UNFPA/UNICEF Joint Programme to End FGM/C, who spoke on behalf of the Deputy Executive Director of UNFPA, Mr. Dereje Wordofa. She emphasised that the Joint Programme itself was the result of a partnership – in line with our event theme – between UNICEF and UNFPA, acknowledging her colleagues Nankali Maksud and Harriet Akullu from UNICEF who were also in attendance. Nafissatou emphasised the importance of the Cairo Programme of Action, even today, as demonstrated by the presence of 6,000 world leaders reaffirming their commitment to end harmful practices, cover the unmet need for family planning and end preventable maternal deaths. She shared some interesting new UNFPA data on the programmatic cost of ending FGC, due to be launched at a session later that day on building financing.

Ole Lelein Kanunga, a Maasai Moran chief working with Amref Health Africa made a powerful intervention on his community-level work with young Maasai warriors (Morans), and the importance of respecting culture alongside work to end FGC. He spoke compellingly of the need to convince people, deep in their hearts, that this practice causes harm to girls, families, and entire nations.

The practice of FGC is maintained due to the social construction around women’s sexuality. Women are to embody purity. Securing virginity is seen as the most important thing in my community. I have the solution – instil values, this is what I do for my daughter.

Youth activism on sexual and reproductive health and rights was put front and centre at the ICPD summit, as it was during our side event. Four inspiring activists: Diram Dubai, Talaso Gababa, Cynthia Simantoi and Dalphine Nkurumwa Setian shared their 2030 visions for a world free of FGC:

Diran: “My vision for 2030 is having a community that has changed minds and attitudes. Even if government says stop it, it isn’t enough. We need to teach the impacts.”

Talaso:“I have lost friends, seen young girls and classmates losing their lives. These experiences enable me to speak up. But I cannot do this alone.”

Cynthia: “We come from arid and semi-arid areas so when the climate changes we lose cows, people lose their livelihoods and dignity. A father will then look to his daughters as a way to retain his dignity, so will marry his daughter off and she needs to be cut first.”

Dalphine: “I want to see a well community, where women and girls are free from harmful practices and have equal opportunities to fulfil their full potential.”

Dr Gitahi Githinji, CEO of Amref Health Africa, closed the event with a call to work in partnership with communities, not as equal partners, but with communities as lead partners in ending FGC.

I feel hugely privileged to be part of this movement for change. Asante sana, thank you, to all my friends and colleagues in the sector. Together, we are so strong.

Support the Global Call To Action to End FGM/C >

Eliud Kipchoge by The Wolf at Flickr.com