Orchid Project is proud to congratulate our Founder, Julia Lalla-Maharajh OBE, on receiving the 2019 Break The Silence Susan Gibbs Ally Award, presented at an event alongside the 74th session of the United Nations General Assembly in New York City.

Awarded by There Is No Limit Foundation, the Susan Gibbs Ally Award celebrates the importance of allies in creating change, and recognises individuals who’ve dedicated their work to amplifying and supporting movements to end violence against women and girls.

Julia’s significant contribution and allyship in the growing, global movement to end female genital cutting (FGC) has been recognised by this honour, and we’re delighted to add our gratitude and appreciation to that of our friends and colleagues presenting this award.

Since 2009, Julia has dedicated her work to ending FGC. An act violence against women and girls, and a violation of human rights, FGC is a global concern that impacts at least 200 million across 30 countries, with a further 3.9 million girls at risk each year.

After learning about the practice while volunteering in Ethiopia, Julia raised the issue at the World 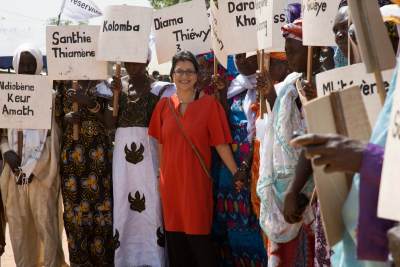 Julia Lalla-Maharajh OBE at a declaration of FGC abandonment in Senegal, 2015

Economic Forum in Davos in 2009 after winning a YouTube competition. Julia went on to establish Orchid Project in 2011 in answer to an opportunity that she recognised to catalyse what was then a burgeoning movement to end the practice.

Since then, holding values of supporting and amplifying grassroots change at our core, Orchid Project has partnered with pioneering organisations working in eight countries across West Africa, East Africa, Asia and North America.

We have also brought together over 200 activists and representatives from 85 organisations through our Knowledge Sharing Programme in Kenya, Tanzania, Sierra Leone, Nigeria and Somaliland, to accelerate change at the community level.

Julia has played a fundamental role in bringing greater attention to the issue of FGC, championing survivor and affected-community voices on global stages, and advocating to ensure governments and leaders around the world prioritise ending the practice. 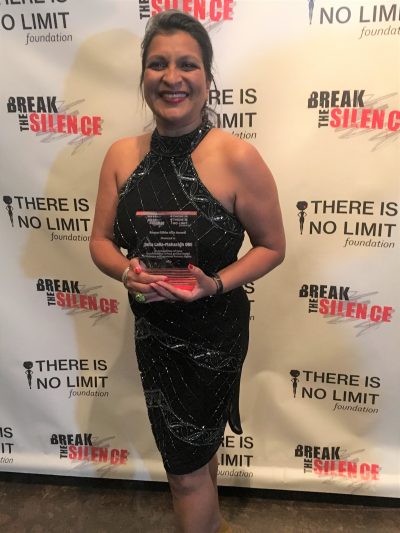 On receiving this prestigious award, Julia commented: “It is with great gratitude and humility that I accept this award, which means that much more coming from our inspiring colleagues at There Is No Limit Foundation, and having been nominated by the Orchid Project team.

Allyship is an essential ingredient in any movement addressing a human rights violation, and I am truly humbled to be recognised as an ally in this global movement to end FGC and protect girls around the world.

As the old proverb says “It takes a village to raise a child”, and I wish to share the recognition from this award with everyone who has been engaged with this movement for decades.

I’m proud and honoured to receive this award, and want to thank all the incredible activists, supporters, colleagues and partners that I’ve worked with over the past decade. Not least I want to thank the amazing, courageous communities who have ended FGC. You give me hope that one day, the practice will be a thing of the past for all girls and all communities.”

This award comes at a particularly poignant time, as Julia transitions to a new, exciting role of Founder & Ambassador, starting in January 2020. Orchid Project’s newly appointed CEO, Grethe Petersen, was also there in New York to see Julia accepted her award.

Grethe congratulated Julia on her award, commenting: “This award is extremely timely and really deserved for someone who has dedicated so much to support the movement to end FGC, as Julia has. It is an honour to be taking up the reins of Orchid Project after her leadership of this organisation over the past 8 years. Thank you, Julia, for paving the way at Orchid Project and for your determination in putting communities and grassroots voices front and centre in our work.”