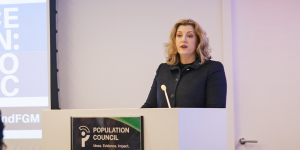 Last week, the UK Government made a historic announcement. Revealed by the Rt Hon Penny Mordaunt MP, the Department of International Development (DFID) committed £50 million towards ending female genital cutting (FGC) in Africa. This is the largest amount ever given by any donor to bring an end to the practice.

Orchid Project is heartened by DFID’s dedication to this issue, and we are proud to work alongside DFID staff in their ambition to support grassroots, community-led efforts to end FGC. Messages from around the world are still being exchanged across social media, celebrating the hope that this announcement has brought for the growing movement against the practice.

This vital investment represents a ray of light in a world that so often does not prioritise girls, their bodies and their sexual and reproductive health and rights. Put simply, the UK Government is doing what’s right for women and their bodies. We are therefore one step closer to achieving a world free from FGC.

But why is this announcement so important? There is little detail yet on what DFID’s £50 million commitment will go to, but the headline information is promising:

What is so inspiring and brings great hope on first looking at this package of funding is that is seems to be truly holistic in nature. DFID recognises FGC as a social norm, held in place by a confluence of different actors and expectations. This recognition has guided them to look at different entry points to ending the practice; through working at the grassroots and with health workers, youth, activists and religious leaders.

Equally inspiring is the scale of this funding. This £50 million is a serious commitment. We can only hope that this attracts other donors from around the world to accelerate abandonment of FGC.

What we have yet to see is which countries will be eligible for funding, and what DFID’s commitment to supporting work at the grassroots actually means in practice. While this is fantastic news for the Africa-led movement to end FGC, we are still missing large-scale recognition that the practice takes place outside Africa, in the Middle East and Asia, with at least 15 million affected girls living in Indonesia.

We can take great encouragement from DFID’s pioneering announcement today. We hope that this is just onestep by one government of many from around the world that we urge to do what is right. Prioritise women and girls’ bodies, rights, sexuality and health, so that all girls everywhere can live free from FGC.