In March 2019, Orchid Project sponsored Olachi (Ola) Peace Ojimadu to attend our partner Tostan’s Training Centre in Senegal. Ola is Programme Associate for the Youth Network for Community and Sustainable Development (YNCSD) in Nigeria and is working tirelessly to end female genital cutting (FGC) within rural communities in the South and South West of the country.

During her time in Senegal, Ola learned about UNICEF’s Six Elements of Abandonment and how Tostan approach their own work with communities. She spoke to us about the difference employing community-led, non-judgmental approaches has made to her work at a community level and the changes YNCSD are seeing as a result. 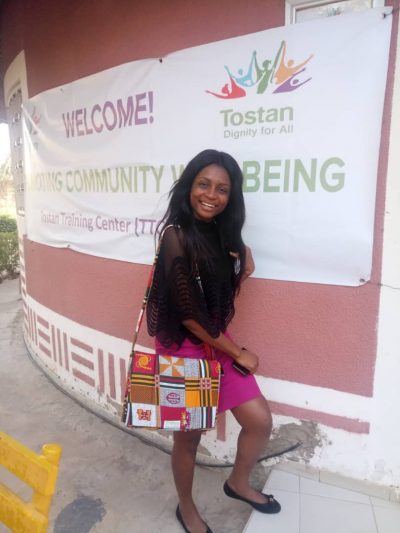 Ola at the Tostan Training Center in Senegal, March 2019.

Nationally in Nigeria, 18% of girls and women aged 15-49 have undergone FGC, but prevalence rates of cutting are known to be much higher in the south and south west of the country. Although federal legislation was introduced in 2015, this requires individual states to adopt the anti-FGC law, and a legal-only approach to ending the practice has been shown to be ineffective. To date, only four of Nigeria’s 36 states have adopted the legislation and, as Ola highlights, such laws can drive the practice underground. In addition, she spoke of a misconception from some NGOs in Nigeria that they can go into communities, draft approaches and interventions and then tell the community what to do.

Tostan’s model advocates for working with communities to champion change rather than telling individuals or a community what to do. It was this community-led approach that proved the real eye-opener for Ola at the Tostan Training Centre. She told us how female genital cutting is an agelong practice in Nigeria, one that is often an established social norm. Girls are commonly cut, she says, out of love and people don’t see FGC as a harmful practice. “It takes a lot,” Ola says, “to change the belief, especially for the older generations” and YNCSD have to convince a lot of people at the grassroots level in order to do so. Furthermore, all communities have a wide range of intersecting reasons for performing the cut, from marriageability of the misconception that it’s more hygienic, and Ola is acutely aware that her organisation cannot apply one approach to all communities.

“The community approach gives you a non-judgemental environment,” Ola states. “You are not coming to call their tradition barbaric,” but are allowing trained community members to facilitate the conversation. Ola and her colleagues started using the non-judgemental approach after she co-facilitated Orchid Project’s Knowledge Sharing Workshop in Port Harcourt, Nigeria, in August 2018. At the workshop, Ola learnt about the UNICEF 6 Elements of Abandonment and then shaped the agenda and led the workshop alongside Orchid, where grassroots organisations working to end cutting came together. Ola remembers her realisation that some of the approaches they had been using could be alienating communities, and notes that “how you approach a community or individual will change your access to them, from young people to religious leaders.” 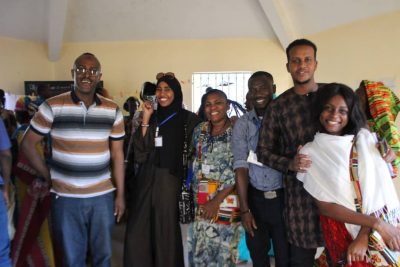 Ola and other TTC participants in Senegal, March 2019.

Religious leaders and traditional rulers are integral to the abandonment of female genital cutting in Nigeria as they hold a huge influence in communities. “Once your Imam tells you something,” Ola says, “it is almost more important than what your parents tell you. If my Imam or Pastor tells me not to cut my daughter, I won’t.” The influence of these leaders is such that the YNCSD has recently worked on a project funded by Amplify Change to focus on engaging with religious leaders. This has led to the organisation holding Key Influencer Forums, inter-religious forums that have brought Christian and Muslim leaders together to pledge to end the practice in their sermons.

Ola highlighted the power of these combined pledges and how effective they are in transforming social norms. Discussing the initial successes of Ola’s organisation’s engagement with leaders, she recounted a very influential and well-known Imam’s pledge that the next time Ola’s organisation visits their community, they will declare abandonment of female genital cutting. In a potentially even bigger move, the overall head of traditional rulers in the Southern state of Ebonyi is even inviting people to community dialogues to discuss the practice.

Change is clearly happening in Nigeria. According to the UNFPA-UNICEF joint programme on female genital cutting, which is active in the south and south-west regions, the risk of cutting has dropped by almost a half and 1,059 communities declared their abandonment between 2014-2017. But what of the changes Ola has seen as a result of changes to her organisation’s approach? She is confident that the work they are doing is contributing to the abandonment of the practice. They have held four successful community dialogues to date and will have eight in total. By incorporating messages about human rights to these dialogues, they are providing communities with a forum to access information about their own rights and solve their own issues in turn. Although focussed on female genital cutting, they are seeing changes to other issues affecting communities, including leadership and gender issues.

At a recent community dialogue in the Oyo state in the South West one woman came from a nearby state for the first time and had never heard that cutting is a harmful practice. Ola recounts how the woman shared a story about three of her friends who had died as a result of the practice. She pledged that she would take the information she had learnt back to her own community and begin the anti-FGC campaign, telling people that the practice is harmful. Ola heralded breakthrough moments such as this and YNCSD are now engaging  more people who have not heard of the dangers of the practice through their dialogues.

For Ola, her work is not done as she continues tirelessly in her efforts to accelerate an end to FGC. Alongside more planned community dialogues and key influencer forums, she is keen to engage young people as part of YNCSD’s current female genital cutting project. They are developing a policy document to serve as a recommendation for school curriculums in the states they work in and will also be providing a recommendation guide for the Federal Ministry of Education to have them incorporate FGC action into schools. With the likes of Ola empowering young people, we can be hopeful of catalysing an end to the practice within a generation.

Orchid Project is proud to sponsor our programmatic partners, activists and grassroots representatives to attend the Tostan Training Center through the Sharing strand of our work.