Addressing female genital cutting on the radio: how it inspires people to speak out

Mamadou Diarra Camara , Tostan supervisor, has been hosting a radio program on a local radio station in the Sédhiou region of Senegal since January 2014. The global theme of his program is violence against women and children, similar programs have been broadcasted in the Kolda, Saint Louis and Matam regions since January as well. Orchid Project funds radio programs in the regions of Senegal that have the highest rates of female genital cutting (FGC) which reinforce the awareness-raising capacities of four of the social mobilization teams during their monthly missions to villages to discuss FGC and other issues.

Kanbeng FM, the radio station that diffuses Diarra’s program, reaches 244 villages in the department of Bounkiling in Sedhiou. Tostan has long recognized that radio in Senegal is widely listened to both in cities and in rural villages. It therefore plays a critical role in transmitting information, especially to isolated communities. Tostan uses radio shows to complement many of its different programs, ranging from topics related to the Reinforcement of Parental Practices (RPP) module to topics pertaining to the human-rights based Community Empowerment Program (CEP). With the support of the Orchid Project, a new wave of 26 radio shows in each of the four regions will be diffused over the course of the year that relate specifically to violence against women and children. 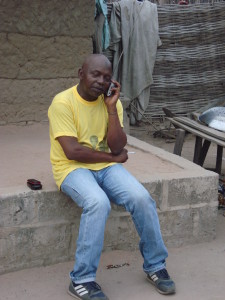 FGC is the central theme on his shows; Diarra told me that his radio show last Saturday was about “FGC and the law.” I asked him if anyone called in to the show; he said that FGC on the radio is a very sensitive topic and people are afraid to call to speak about it publicly. Despite this, he still received three calls over the course of the hour-long show. He received feedback from people who were unaware of the law prohibiting FGC in Senegal, which was put in place in 1999, and which had been voted and passed at the level of the National Assembly. Diarra’s listeners told him that they had been misinformed on certain aspects of the law and that his program cleared up many issues.

When I asked Diarra if he felt like his radio programs were making an impact, he proceeded to tell me a story about something that had happened a few weeks ago that demonstrated the importance of the transmission of information about FGC via radio. At the end of his show on Saturday, he received a personal off-the-air call from a listener telling him about a situation involving a girl from The Gambia being brought to a Senegalese village in the Sédhiou region to be cut. The situation of bringing a girl across the border to be cut “while on vacation” is not uncommon. The caller shared her location, prompting Diarra to ask the social mobilization agent Mariama Doumbouyo, who works in the Sédhiou region, to speak to the family.

By the time this information became known to Diarra and Mariama, the cutter disappeared, and the girl who was cut returned to The Gambia. However, Mariama took the opportunity to speak with the girl’s mother, as well as the family that lodged the girl in the Senegalese village. Mariama talked to them about the law in Senegal prohibiting FGC, and also about the harmful consequences that result from the practice.

Diarra’s believes his radio shows have a definite impact if an hour of speaking on the radio can inspire people to speak out about FGC in their communities. The more people hear others talking about FGC, the more comfortable they will become with talking about it themselves. And in talking about it, they can begin to break down the misunderstandings surrounding the practice and understand the harmful consequences that result from its continuation.

This blog is part of a series on the Social Mobilisation project that Orchid Project funds in support of Tostan’s long term Community Empowerment Programme. Social Mobilisation is focused on ensuring the acceleration of abandonment of FGC in Senegal. Teams of volunteers who have already abandoned FGC, called social mobilisation agents, visit and create dialogue with inter-connected communities on human rights and the negative consequences of FGC. Their work aims to spread the message of abandonment and encourage others to join them.

Social mobilisation agents are individual members of the community who have been inspired by their understanding that FGC is a harmful practices, and are eager to share their own experiences with others. Often, they are religious, traditional or community leaders who are widely respected and well-connected, active, influential participants.

You can find out more about Social Mobilisation by clicking here. If you would like to support this work, please click here