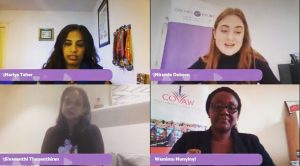 Activists from around the world are calling on governments and members of the public to take action to support an end to female genital cutting.

Cutting impacts at least 200 million women and girls, in over 45 countries across Africa, Asia, the Middle East, and within diaspora communities worldwide. It is a truly global issue, which presents multiple, complex challenges within each different context where girls are affected.

The good news is that committed activists, grassroots organisations, communities, NGOs and, increasingly, governments are turning towards this issue. Together we are presenting solutions as to how we can protect girls and allow them to thrive, free from the practice.

We are seeing significant progress. UNICEF reports that a girl is around one third less likely to be cut today than she was three decades ago. More and more, communities are deciding to leave cutting behind, but there is still so much more to be done.

On the International Day to End FGC 2019, Orchid Project brought three esteemed guests together to speak live on Facebook about the global movement to end cutting, and the challenges that we still face.

We were joined by Sivananthi Thanenthiran, Executive Director of The Asian-Pacific Resource and Research Centre for Women (ARROW), based in Malaysia, Wairimu Munyinyi-Wahome, Executive Director of the Coalition on Violence Against Women (COVAW) in Kenya, and Mariya Taher, Co-Founder of transnational Indian & US organisation, Sahiyo.

They called for governments and members of the public to take action and support an end to this harmful traditional practice.

Together with Siva, Wairimu and Mariya, we call on governments to:

…and for members of the public to:

If you missed the live Facebook discussion, you can still catch up here. You can also read more blogs from Orchid Project on the news and blogs section of our website.