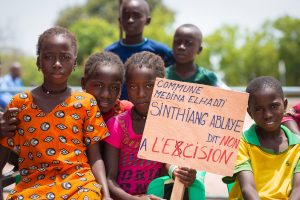 This is the second investment the UK Government has made into ending FGC, after committing £35 million in 2013.

Julia Lalla-Maharajh OBE, CEO and Founder of Orchid Project, a charity with a vision of a world free from FGC, said:

“Today’s announcement from the UK Government is historic. It marks the largest ever investment into ending female genital cutting (FGC) from any donor globally.

This investment couldn’t come at a more important time, as we reach a tipping point in many countries, as more and more communities choose to stop cutting their daughters.

DFID’s £50 million investment recognises the increasingly urgent need to do more, to prevent girls from having to live with the often lifelong, devastating consequences of FGC. It also invests across the whole system of ending the practice, from working with communities for abandonment, through to using religion, legislation and to support work that stops medical workers practising.

The good news is that change is already happening, and we are poised on the brink of that change growing exponentially. Thousands of communities around the world have already publicly declared that they’ve abandoned FGC, and we hope today’s investment can help snowball this flourishing grassroots movement.

This £50 million investment from DFID shows pioneering leadership amongst the international community, and a commitment to improving the lives of girls around the world that other global powers must heed and follow. ”

Orchid Project is a London-based charity with a vision of a world free from FGC. It is our mission to foster and accelerate abandonment of FGC around the world. We achieve this by partnering with organisations that deliver a sustainable, proven end to FGC; sharing knowledge and the potential to end the practice within a generation; and advocating to ensure that stakeholders prioritise and resource an end to FGC.

FGC is the forcible removal of all or part of a girl’s external genitals and the average age a girls is cut is under 5 years old.

The type of cutting varies in different communities. It ranges from cliterodectomy (removal of the clitoris) to infibulation – which can include complete removal of the external genitalia and sewing together to seal the wound that remains, with a small hole left for menstruation and urination.

At least 200 million women and girls are affected by FGC, in 45 countries in Africa, Asia, the Middle East and within the global diaspora.

For more information go to orchidproject.org.