As FGC-abandonment activists and NGOs from all parts of the globe get set to mark the internationally recognised day for the abandonment of female genital cutting, Liberia’s president has declared February 6th to be a working holiday. President Ellen Johnson Sirleaf called on government ministries and local organisations to recognise the occasion and observe the day.

This marks an incredible step forward and the Liberian government deserves our support. In Liberia 58% of the female population are not cut and FGC remains a legal practice. FGC is performed by a women’s society, the Sandé, which operates under much secrecy. The society holds ‘bush schools’ across rural Liberia to teach traditional beliefs on marriage and motherhood including female genital cutting. The secret women’s society is a leading cultural force in many villages, and is supported by prominent influential groups in Liberia.

In early 2012, there was significant press around the story of Mae Azango, the courageous Liberian journalist who went into hiding for reporting on FGC in Liberia. A front page story in a leading independent paper, “Growing Pains: Sandé Tradition of Genital Cutting Threatens Liberian Women’s Health,” examined the Sandé’s practice of FGC. After receiving death threats, Azango was backed by an international campaign championed by Amnesty International and the Committee to Protect Journalists, demanding her safety and the freedom of the press around women’s rights. The Liberian government was forced to come out in support of Azango and speak out against the practice.

While the practice has not been illegalised in Liberia, the government had previously not made a public stance about it. President Sirleaf’s message now on International Day against FGC, marks a more active role by the Liberian government in eliminating FGC. Following on from a United Nations General Assembly resolution in December – ‘Intensifying global efforts for the elimination of female genital mutilation’, which was led by the African Union, there has been an international focus on moving forward to a global end to FGC. 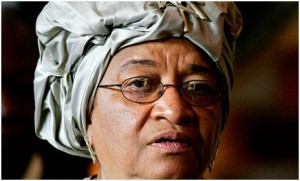 Sirleaf is currently a high-profile player in the world of “Development”, sitting alongside David Cameron on the UN Secretary General’s High Level Panel for a post-2015 initiative. Her position of influence over the new UN framework which will replace the Millennium Development Goals, means that her focus on FGC is a promising one. Orchid Project has high hopes for President Sirleaf, and Liberia’s commitment to FGC abandonment.