Since 2012, Orchid Project has partnered with Tostan, a Senegal-based NGO that focuses on sustainable development and positive transformation of communities based on respect for human rights. Tostan’s Community Empowerment Programme (CEP) is a 3-year non-formal education programme implemented in six countries. The CEP has multiple outcomes, and one key result is the abandonment of female genital cutting (FGC).

This has resulted in incredible movement of change at the grassroots. To date, almost 8,000 communities have publicly declared abandonment of FGC across West Africa as a result of the programme.

Tostan and Orchid Project have developed the Social Mobilisation Programme (SMP) to complement the CEP to accelerate the abandonment of FGC in four regions in Senegal. 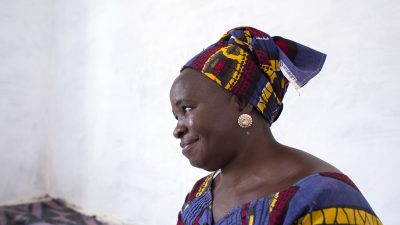 Social mobilisation agents, such as Marieme Bamba (pictured right) are individuals who have themselves gone through the CEP. SMAs are volunteers, who work in teams of six volunteers to deliver these activities in communities that have not gone through Tostan’s CEP. Marieme and her team travel by foot or horse and cart, to villages within their social networks, sometimes travelling days at a time in order to deliver the social mobilisation missions.

Upon arrival, the SMAs hold an initial meeting with key village members, including Imams and villages leaders, providing information, addressing misperceptions about FGC that these influential people may hold, and asking for permission to engage with the wider village population.

Once access is granted, SMAs deliver a whole village meeting, which includes participants representing all community members, which is key for establishing collective action needed for social norm shift.  SMAs facilitate open dialogue about FGC, creating a safe space for community members to ask questions and share nuanced perspectives about FGC, which in turn furthers their understanding of the practice. Participation of key village members in this meeting empowers villagers to continue open dialogue around FGC after the SMAs leave.

For more information and summary of recommendations click here.