Part I: Public Declaration for Abandonment of FGC in Senegal

15 November 2015 was a momentous day for everyone involved. Over 52 communities came together to publicly declare the abandonment of FGC in Medina Sabakh, Kaolack, Senegal – a great advancement towards achieving our vision – to see an end to FGC in out lifetimes. The declaration was supported by our partner Tostan, and their tremendous efforts to end FGC.

Although the ceremony was only a one-day event, it was a culmination of a series of project activities over an eight month period leading to the celebration. A quick catch up – from March 2015 to November 2015 a series of social mobilisation activities were carried out with 52 communities – each village had previously benefited from Tostan’s strategy of organized diffusion as part of a three-year Community Empowerment Programme (CEP) project that ended in 2013 (for more info see here). The social mobilisation activities can be clearly explained in five stages:

Firstly, the Project Launch Seminar was held on 30 March 2015 in Medina Sabakh. It was a great opportunity to bring together local authorities and community representatives in order to raise awareness about the project and to target neighbouring villages who potentially intended to cut their daughters. Seminar successes were multiple, allowing Tostan to gather support for their human rights based approach and encourage participation which led to community leaders pledging commitments. 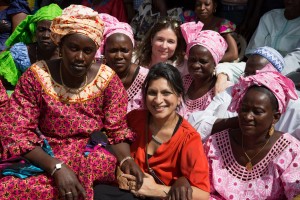 The goal was set – the two teams aimed to visit six villages in the Kaolack region and the areas bordering the Gambia, each for two days, over a twelve day period. The plan was in action – on arrival the teams respectfully met with the village authorities to deliver action plans and ask permission to talk to community members. Reception granted, the teams delivered their missions motives – they began engaging community members in discussion about FGC in efforts to gauge whether FGC abandonment was realistic.  If the SMAs felt the community was engaged they attempted to remobilise and motivate these communities in preparation for participation in the public declaration. The first round of visits comprised four missions in total, reaching fifty communities who were accepting of Tostan’s approach.  The teams then re-visited each of the fifty communities, and managed to reach two more including ethnic groups Fulani, Mandinka, Bambara, and Wolof. The second and third visits were conducted for logistical and planning purposes in anticipation of the public declaration.

“Raising-awareness is the first step in awakening minds” – Mr. Aly Dié Touré the zone chief of Kaur, the Gambia. This statement opened discussions around the harmful consequences of FGC. Due to the nature of the geographical context covered during the Senegal social mobilisation missions, several Senegalese participants stressed the importance of having a further meeting with bordering the Gambia.  The zone chief of Kaur welcomed the Tostan team and granted permission for the social mobilisation activities to proceed.

The single mission that went ahead in the Gambia gave a lot of insight into the perpetuation of the practice. Two social mobilisation teams visited ten villages within the Kaur zone, revealing seven communities that practiced FGC, amongst them the village of Jahawur Mandinka (aka. Diagowar). The Mandika ethnic group had a reputation of applying social pressure to influence neighbouring communities to conform to FGC, resulting in an increasing FGC prevalence rate in the area. The SMAs concluded that the communities were not ready to declare abandonment but felt confident that existing strong leaders would impart knowledge and education leading to a future free from FGC.

Stages four and five will be continued in Part 2: Public Declaration for Abandonment of FGC in Senegal. Coming soon!