To refresh your memory, Part I of this blog post explained the series of project activities that led to 52 communities declaring abandonment of FGC in Kaolack, Senegal. Part II continues with stage four…

Part II: Public Declaration for Abandonment of FGC in Senegal

Four Inter-village meetings (IVMs) were held between April and October with communities that expressed interest in a public declaration. The first two meetings in Kaymor and Paoskoto acted as physical forums for a transfer of knowledge around FGC. It was a great opportunity for neighbouring communities of the same intermarrying network to unite and draw parallels between existing practices/ideologies and new found understandings. In preparation for the impending declaration participants were eager to make resolutions for the future, including a promise to increase youth understanding and involvement in ending FGC, encouraging community members to report cases of FGC and collective action around enabling a public/active forum for discussion about FGC and its harmful consequences. Each resolution in turn would aid local leaders to ensure discontinuation of the practice.

Although the latter two meetings focused predominately on planning and logistics, they also marked the signing of the commitment sheet. Three signatories from each community cemented the verbal vow from over 50 communities who wanted to publically declare the end of FGC.

Days before the declaration, monitoring and supervision activities were set up to act as a constant framework extending beyond the event. This framework of activities aimed to generate community discussion around project implementation, offering an opportunity to reflect on successes and challenges whilst making appropriate recommendations for improvements at the community, regional and the national levels.

Declaration day arrived. Abandoning FGC in a public ceremony reminds of the collective action/responsibly necessary to end the practice i.e. when communities witness their neighbours abandon, it generates motivation to maintain their commitment. Supporters came from far and wide, a crowd of 1500 people gathered in Medina Sabakh, amongst them were UNICEF and UNFPA, HRH the Crown Princess of Denmark and the ambassador of Denmark in Mali. Local representatives from the municipalities of Nioro Commune, Taiba Niassène, Paoskoto, Dabaly, Prokhane, Kaymor, Darou Salam, Ngayène Sabakh, and Medina Sabakh bordered the grounds, holding placards with pride, symbolising their community’s commitment to ending FGC. 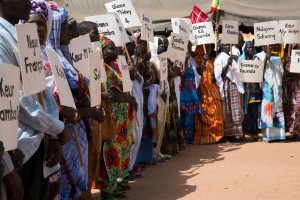 52 communities unite to declare the abandonment of FGC

Media came in abundance to broadcast the day’s achievements from local radio station Sud FM to the international Time Magazine. Youth participation was encouraged throughout the declaration; their understanding of the harmful consequences of the tradition and commitment towards ending FGC was celebrated through dance, music and speeches alike, ‘We join the historic movement initiated since July 31, 1997 at Malicounda Bambara (department of Mbour), which has continued to shine through all of Senegal and in the sub-region and has now 5987 registered villages who gave up completely the practices of FGC and child marriages” (Youth delegate speaking at the declaration).  It wasn’t just youth that pledged their commitment, perhaps the most powerful gesture of abandonment was the display of burning circumcision robes by a former female cutter. 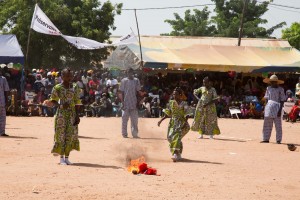 15 November 2015 was a momentous day for everyone involved. The declaration was achieved, the commitment was made, but the work doesn’t end there. To find out more about FGC ending in Senegal visit Tostan’s website.