“I am ready now to continue my efforts with an even greater conviction than before and more courageous because I feel more and more that I am no longer alone in this and that the entire world is supporting me.” – Mah Cissé

In November 2014, Mah Cissé travelled to Copenhagen to speak as guest of honour at an international FGC conference co-hosted by Orchid Project at the Danish Parliament. Speakers at the conference included Tostan CEO Molly Melching, Orchid Project founder Julia Lalla-Maharajh, Her Royal Highness Crown Princess Mary of Denmark, Coordinator for the UNFPA/UNICEF programme on Female Genital Mutilation/Cutting Dr Nafissatou Diop, Ministers from Denmark, Sweden and Norway and the UK Ambassador to Denmark.

On the day however, the most powerful voice belonged to Mah Cissé. Mah, real name Kadidia Sounfountera, is a native of Mali and so required Molly Melching to translate her story on stage as she spoke. Despite this language barrier, Mah Cissé delivered an impassioned speech that immediately resonated in the hearts of all at the conference watching her speak.

Her story elucidates the importance of community empowerment and education programmes, and shows how FGC can be abandoned if the right methods are employed. Earlier this year, Orchid Project supported Mah Cissé’s community, and 13 others in the surrounding area, to abandon FGC. Mah Cissé was nominated to co-ordinate this process and overcame many difficulties in the build up to the declaration on February 6th 2014.

As Mah Cissé says, it was not a simple choice to begin working on ending FGC. “It was a difficult decision. I talked about it with my husband and he looked at me and said how do we do this, what do we say? I wanted to help other women who wanted to abandon this too, but I didn’t know how.

Tostan came to my village, and together we studied different human rights that we were entitled to, health information, and problem solving. We also learned about the human right to express our own opinions and how to organise, and so we decided to organise. In groups we went from house to house and we told people about the consequences of FGC and this practice. And we decided to declare an abandonment of this practice. 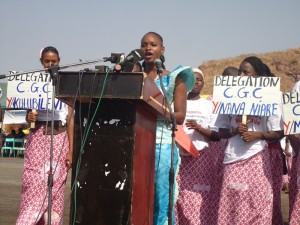 So we went to the national committee that helps organise the abandonment of FGC in Mali and we told them that we have decided to abandon FGC in our community. And they said that the 6th February is the ‘International Day for the Abandonment of FGC’, so to wait and do it on that day as it is close by. So we decided to do it then.

They also said they would rip the clothes off the women, clothes which were a celebration of that day and all the women were wearing them. So they were threatening us through the radio and telling us that if we do not stop they will not be present at our baptisms, and if we died they will not give us a Muslim funeral. And yet we decided we were engaged, we were committed, and we went through with that declaration.”

The resistance that Mah Cissé and others around her met was not unusual, especially in areas where change is only now beginning to happen. Yet across Africa we are seeing that when communities who have abandoned speak with their neighbours, their friends, their relatives, when they share the reasons why they made this decision and break the taboo, others make the same choice. Change happens first at a community level and it is this change we need to support if we are to see an end to FGC in our lifetime. As Mah Cissé said, the entire world has a role to play.