Last week, Orchid Project was at the Commonwealth Youth and Gender Equality Network Forum in Malta, working with young people across the Commonwealth for a new ‘Gender Agenda’, advocating for improved policies on gender and equality issues from a youth perspective.

Delegates were drawn from all over the Commonwealth, conducting inspirational work on gender issues. Through our professional lives and personal volunteering, the group covered such a breadth of issues across the world: disability, transphobia, safe abortion rights, entrepreneurship, indigenous rights and many, many more.

The Network was launched at a critical time as 2015 sees: the launch of the Sustainable Development Goals which will set the agenda for the next 15 years; the 20 year anniversary of the Beijing Declaration and Platform for Action for women’s empowerment; and the expiration of the Commonwealth Gender Plan of Action. The forum took place six months ahead of the Commonwealth Heads of Government Meeting (CHOGM), enabling discussions and priorities to be developed ahead of active engagement in forums running alongside CHOGM.

Motivating speeches from the Youth Chairs, The Rt Hon Lord Howell of Guildford and HE Ms Marie-Louise Coleiro Preca, President of Malta opened the forum. Lord Howell said: “The Commonwealth is a connected network of countries with shared values that together can initiate change. This forum for grassroots action is a launching point for 1000 actions and 1000 pressures.”

HE Ms Marie-Louise Coleiro Preca said: “Your work will have long term effects on gender and equality in the Commonwealth and beyond, with your recommendations feeding into CHOGM and the understanding of leaders and civil society.” 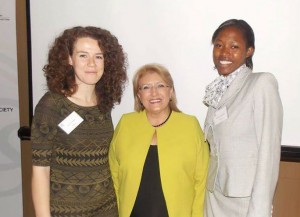 Lucy and Christine with The President of Malta

Sister Fa performed on the opening day, showcasing to delegates how she uses her music and experience to enable communities to discuss the issues of female genital cutting and child marriage. It set a great precedent for the forum, opening the space to be creative, fun and passionate, uniting everyone in the room in a call for more action. 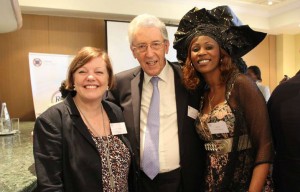 Claire Whitaker and Lord Howell, Chair and President of the RCS respectively, with Sister Fa

Throughout the five day forum, Christine and Lucy worked on the Sexual Reproductive Health and Rights (SRHR) working group, prioritising issues, developing common beliefs and principles and setting recommendations for how national governments should address SRHR. There was real acknowledgement in the group of the need for a human rights based approach to address discriminatory social norms as well as structural inequalities leading to a lack of access to information and services. Other working groups focused on: child marriage, youth transitions, governance, and sexual orientation and gender identity.

Christine, speaking about her experience at the forum, said “Interacting with young activists from all over the world is exciting and I feel humbled meeting the President of Malta who is so inspiring. I am looking forward to taking all that I have learned and incorporating it in work with my community, working for an end to female genital cutting, child marriage and for the empowerment of women and girls.”

Various speakers shared their experiences and understanding, including those working on gender, youth, civil society and business within the Commonwealth Secretariat and CHOGM forums, Dr Ruth Farrugia, Director of The President’s Foundation for the Well-being of Society and Penny Williams PSM, Australia’s inaugural Global Ambassador for Women and Girls. Dr Ruth said: “Human rights are not a gift or an act of charity, no-one is giving you anything, they are yours”. There was agreement throughout the forum and echoed by our Chair John that: We often hear of young people being the leaders of tomorrow but the people in this room show that young people really are the leaders of today, the leaders of now”.

Sister Fa spoke about her experience and work to educate young people on female genital cutting. She shared how the practice is a social norm, grounded in assumptions such as that the practice will ensure chastity and that a girl will therefore not get pregnant before marriage. She talked about the need to ground work in community education, providing information to young people so they can understand more about the practice. Hearing her drive and passion, her successes and resolve to continue was inspirational for all of us working on difficult gender discrimination issues across the world. 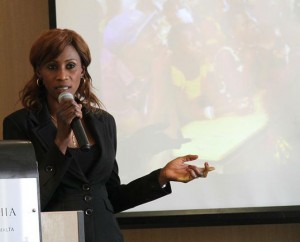 Sister Fa speaking about her work

We presented our conclusions to HE the President of Malta on the final day and will take these forward in our collective and individual quests for gender equality, challenging the Commonwealth, its governments and beyond to take action now. HE urged us to continue advocating for change, entering dialogue and contributing to social justice in order to transform our communities. As summarised by Chair John, “we are a tapestry in our diversity, at the heart of a pioneering youth space to address gender and equality”.

All in all, it is wonderful to be part of such a network of game-changers – enthusiastic and outspoken advocates, activists, campaigners, teachers and artists. The coming together of such minds and hearts to strive for change, deliberating ideas and developing concrete plans adds a voice not often heard that has the potential to address disempowerment and discrimination worldwide.