In late November the capital of Zambia, Lusaka, played host to the first African Girls Summit on ending child marriage. Organised by the Africa Union, it was truly a momentous occasion, following on from the Girl Summit hosted by the UK government in London in July 2014, and bringing together well over one thousand delegates, mainly from around Africa, and some from around the world. Orchid Project was there, too, banging the drum for ending FGC and reminding people of the links between these two harmful traditional practices by holding a pre-Summit event. We also took some of our partners with us to Zambia – Fatou Diatta aka Sister Fa, our Ambassador and partner, Cess Mugo who is Programme Officer with Education Centre for the Advancement of Women (ECAW) in Kenya and Sarah Tenoi, Project Manager with SAFE Maa also in Kenya.

On Tuesday 24th November we all went along to the youth preparation day organised by Girls Not Brides and Youth for Change. There were numerous youth delegates attending the Summit, from all over Africa. Sister Fa opened the day by talking about her experiences working with young people and her belief that young people are the future of ending female genital cutting and child marriage. The Youth for Change panel, made up of Hirut and Kiram from Ethiopia and Upendo and Neema from Tanzania, facilitated the morning sessions and we heard from Girls Not Brides about their theory of change and priorities for the summit, meaning that all attendees were up to speed on what they should be talking to African government representatives and others about during the summit. My favourite part of the day was when we did a Power Walk during which participants pretended to be different boys and girls, whose parents made different choices from them, exploring the social dynamics of harmful traditional practices and the impact they can have on the lives of girls who experience FGC, and both girls and boys who are married young and don’t have the chance to finish their education. 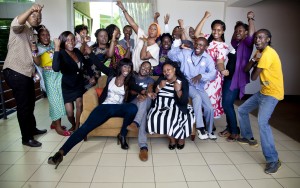 Youth delegates at the preparation day

On Wednesday 25th November it was time for our Orchid Project partners to take the stage at our event alongside representatives from Youth for Change and The Girl Generation. Our event sought to raise awareness about the links between FGC and child, early and forced marriage, by sharing the stories and experiences of our partners with a focus on young people and their agency. Opening remarks came from the UK’s Department for International Development and then we opened with a testimony from Upendo from Youth for Change Tanzania, who shared testimonies from girls in Tanzania affected by FGC and child marriage. Amina Mtengeti, The Girl Generation’s youth delegate, who is also from Tanzania then shared stories from her work with Children’s Dignity Fund. Next up was our very own Sister Fa who talked us through her approach to working with young people, and treated us to an impromptu performance! Having a hip-hop star on a panel often leads to surprises.

Our partners from Kenya, Sarah and Cess then shared their experiences from Kenya, talking about how SAFE and ECAW use social norms and human rights based approaches, and in the case of SAFE Maa also traditional performance, to encourage social norm change around both FGC and child marriage. Hirut from Youth for Change Ethiopia was the last of our panellists to speak, but definitely not least, telling us how, even though she was from a wealthy family in Addis Ababa, her parents started talking about her marriage when she very young. She avoided marrying young, however, and now works for Girl Effect in Ethiopia, so she told us about the successful Yegna programme which seeks to influence social norm change through communications and positive stories about girls. 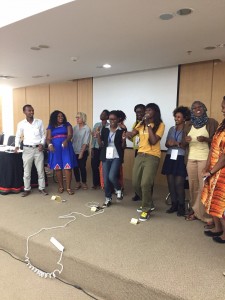 It was an inspiring session, and our chair, Faith Mwangi-Powell, Global Director of the Girl Generation, continued that with her summing up. Faith talked of how she gave birth, aged 30, in a hospital in the UK, and yet, with six medical professionals around her, she was still terrified about what to do and what would happen next. She asked the audience to think about what a ten, twelve, thirteen, fifteen year old girl must feel, when a grown woman feels scared. Working in the area of harmful traditional practices, we all have to become a bit desensitised to them, but for me, this was a stark reminder of why we do what we do. All of our panellists highlighted the links between FGC and child marriage and brought hope for change by sharing their work, their successes, their challenges. Sister Fa brought the event to a close with another performance, bringing the roof down and getting panellists and audience members alike up on their feet and dancing with the excitement of hope.

Download our factsheet to read more about how these two issues are linked.