Hope will never fade so long as determination drives us.

We are responsible for the future, and envision a bright destiny. Change is inevitable, but it is clear that we need to be the change we want to see.

Centuries have passed, history remains, and time moves on – everything is in a constant state of flux. We need to consider the issues that alter our livelihoods, shaping our future.

Calling the leaders of tomorrow, let us be the best we can be and achieve the future we imagine for women and girls worldwide.

What should our focus be?

Ethiopia is in the top 25 countries worst affected by child early forced marriage (CEFM) and female genital cutting (FGC). This must change. We have more to tell the world than this.

We must prioritise accelerated efforts leading to substantial progress in reducing the prevalence of these harmful traditional practices. Youth for Change, Ethiopia as part of the global youth-led coalition launched in 2014 in the United Kingdom are working towards an Ethiopia free from harmful traditional practices by 2025, with an aim of achieving a 0.5% prevalence rate by 2020.

In order to alleviate these traditional practices and the negative social and health repercussions, increased work on the ground in practicing countries is vital.

At Youth for Change we are committed to amending and enforcing current legislation against each practice as well as working to support girls and their families toward ending the harmful traditional practices.

In Afar and Somali regions (vast arid areas in the north-eastern and south-eastern Ethiopia) girls are subjected to the most extreme form of FGC, known as Type III or infibulation, which involves the removal of the clitoris, labia minora and labia majora and the remaining skin is sewn or sealed together. This procedure happens to girls as young as 7 days old.

Fatuma is 16. She is in Grade 8 and is currently preparing for the national high school entrance exams. Her dream is to be an engineer. She is quite a shy girl, but she came forward to share her story, despite the taboo surrounding speaking out about such issues.

Fatuma was cut 7 days after birth.  She has always experienced serious health issues but most commonly painful menstruation, and she often hears about the negative health effects women in her community suffer due to FGC. She emphasised that FGC becomes particularly threatening when a woman becomes pregnant.

Fatuma is not alone in her experience, her story is shared by many girls in Afar.

Hawa, 15, was born in Ayssaita, an old town in Afar region close by Fatuma’s village. Hawa, like many other girls is part of a pastoralist community, and travel across Ethiopia with her family. She told me “wherever I travel, I very rarely come across uncut girls, and I’ve learned that there are many negative consequences of FGC that remain bound to our culture.”

The effects of FGC last a lifetime. Not only do women endure painful menstruation, urine infections and other health complications during adolescence, during pregnancy and child birth women are at risk of hemorrhage, obstetric fistula, and even death. In the Afar region, there is an increased risk of still birth, as traditional birth attendants struggle to deliver the baby. After birth, women are re-infibulated and their legs are bound for up to 40 days for the stitches to heal. 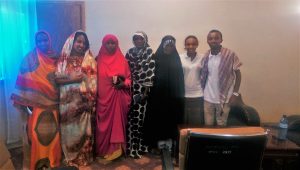 In rural regions in Ethiopia the practice of FGC is deeply embedded within long-standing tradition, cultural norms and encouraged by religion.

Despite this, progress is underway, some communities are starting to call the practice haram (forbidden by Islam) headed by religious leaders. In other cases communities opt for a lesser cut as opposed to infibulation and hold the belief that FGC should continue to be sunna (verbal record of the teachings, deeds and sayings, silent permissions of the Prophet Muhammed).  But this is not enough, FGC needs to end in its entirety.

Change is underway. The Ethiopian Government have shown a keen interest and commitment to end FGC and CEFM as displayed at the national Growth and Transformation Plan in support of our work to create better change, because change is inevitable.