International Day for Abandonment of Female Genital Cutting (FGC) has come again, and reflecting on the progress the world has made in efforts to end FGC over last year helps people better understand the challenges involved with trying end FGC in this new year.  According to the Centers for Disease Control and Prevention (CDC), in the United States alone more than 500,000 women and girls have undergone FGC, or are at risk of being cut.

FGC is prevalent across many areas of the globe, but is widespread throughout many African countries, parts of the Middle East and Asia where the practice has been ingrained into social/cultural norms and traditions for generations.  Moreover, many of these groups who migrate from their home countries to the U.S. continue practicing the cultural underground tradition of FGC, which has secretly thrived in the U.S. despite the practice being outlawed for many years.  In fact, according to recent government statistics, efforts to end FGC in the U.S. have been ineffective and even counterproductive because outlawing FGC has only pushed the practice further underground.

The number of women in the United States who are at risk of FGC has more than doubled since the year 2000, and that figure has grown exponentially in the last five years alone.  However, it is important to understand that these women are not “victims” as some women see the practice as a social expectation and choose to undergo the procedure.  Similarly, sometimes young women view this rite of passage tradition as a time to “celebrate” due to the cultural expectations and family pressures, as well as their marriageability status within the community.  Claiming that these women are “victims” disempowers them, and gives the impression to the world that “cut” women are fragile in some way.  Women who have undergone the cut/FGC have a powerful voice. The world needs to create more platforms so that the power and validity of these voices can reach a much wider audience.

Current data on exactly how many women are at risk of FGC, or have already endured the practice is fairly limited in the United States; because not many studies have been done in recent years.  This being said, the CDC has been attempting to gather reliable data for some time, and are planning to publish the findings soon. The U.S. Government will use data collected by the CDC as the basis for funding new studies on FGC, which is a topic that has been a secondary priority for the United States Government until recently.  President Obama stated, during his speech in Kenya, that “There’s no excuse for sexual assault or domestic violence, there’s no reason that young girls should suffer genital mutilation, and there’s no place in a civilised society for the early or forced marriage of children.”  Awareness on FGC is growing, and the notion of protection-over-tradition is starting to be prioritised by the U.S. 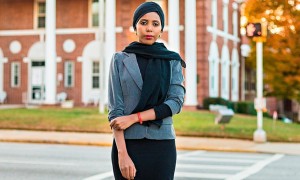 Thanks to the exhaustive efforts of Non-Governmental Organisations (NGOs), individual campaigners like Jaha Dukureh (pictured left), and data collection from CDC and other governmental programs, the U.S. Government has made ending FGC a focus point for 2016.  Recent announcements that the U.S. Government is funding new grant programs have made significant waves throughout FGC advocacy groups, reinvigorating the hopes of the general public that the U.S. is more serious about reducing the number of girls and women at risk of being cut, and motivated to end FGC.  However, even though the U.S. has one of the lowest prevalence rates in the world, the Government needs to fully acknowledge the serious health and psychological risks FGC presents to all at risk women, and be ready to take action on ending the practice not only on a national level, but on a world-wide scale as well.  Despite this, these new Government grants are definitely a step forward in the right direction for the United States towards ending FGC on a national and international level.

These Government announcements have alerted the advocacy community that the U.S. is stepping up efforts to end FGC.  Moreover, we are elated by the possibility of increased funding for better FGC research and prevention resources because if this project yields successful outcomes, hopefully government funding will become more frequent in the future.  The importance of increased government assistance with advocacy cannot be understated, but as people, we must also remember that every person has a powerful voice, and the most change happens when individual voices unify into one about ending FGC.

Currently, the deadline for project applications is April 15th, 2016, with applicants potentially receiving a maximum award ceiling of just under $350,000 of additional funding.