After spending a busy day organising school sensitisation programmes on early pregnancy and family planning with members of the Young Beninese Leaders Association (YBLA), I took a moment to think about some key challenges faced by girls and women in my continent Africa and in our world.

This reflection was inspired by a photo that I saw on Facebook. The image depicted an eight year old girl, whose angelic face spoke to me. This girl, like every girl, deserves love, opportunity and above all education. Her name is Fati.

Fati is due to undergo female genital cutting (FGC) and quickly after she will be married to a wealthy husband who may be twice her age, most likely before her ninth birthday. These two practices will be encouraged and enforced by Fati ’s parents and by the community at large.

She will endure the cruelest experience a girl will ever face and will suffer physically, psychologically, morally and even spiritually. This pain will be lifelong.

I later discovered that her parents had removed her from school, a week later she underwent the cut and a month later she was subjected to child marriage. In utter disappointment I asked myself why?

Why do we still have millions of Fati’s in the world?

Why do we continue to tolerate violence against women and girls?

Why do we fail to build a sustainable future for women and girls in a society where gender equality is the norm?

As an advocate for Sexual and Reproductive Health and Rights, I decided that after reading Fati’s story I would focus my attention on the rights based components to health, and develop my understanding of both female genital cutting (FGC) and child early/forced marriage (CEFM).

Although I had a basic understanding of these issues I was convinced that there was a low prevalence of FGC in Benin. In fact 13% of women and girls are affected by FGM, that’s 300,000 women. The majority of these women receive Type II FGC, referred to as excision, which means that the clitoris and the labia minora are partially or totally removed. Twenty seven countries in Africa practice FGC. Worldwide, it is estimated that 200 million women and have undergone some form of FGC. If current trends continue, 15 million additional girls between ages 15 and 19 may be subjected to it by 2030 . This is why UNFPA, in partnership with UNICEF, lead the largest global programme to accelerate the abandonment of FGM/C. The programme currently focuses on 17 African countries and also supports regional and global initiatives.

This revelation helped to shift my perception and I became less judgmental in my outlook as I tried to deepen my knowledge of the complexities of each practice, in the social, cultural and economic context. FGC should not be attributed to cultural relativism, it is a universal human rights issue, and should not be tolerated.

I’d never have thought that one single image I saw on Facebook amongst thousands of others would have influenced my way of thinking and shifted my perspective so drastically.

As a doctor I’ve treated numerous girls who have experienced complications from undergoing FGC, including excess bleeding, infections etc. but it never affected me in the same way.

After months of research I concluded that there needs to be a focus on the power of communicating change. Exploring new and innovative strategies to involve youth advocates through social media, sport, performance and music is key to raising awareness and broadening the conversation helping to end the practice of FGC in this generation. Collective action from the whole community is necessary to eliminate the myth that an uncut girl is promiscuous, dirty and unmarriageable. By engaging boys and men as ambassadors for women’s rights we can work together to shift societal norms, spreading the message of change and acceptance of the abandonment of FGC.

Most importantly, we must work to build new community dialogues that are stronger than the existing communications. For example, the ‘keepers’ of the tradition who perpetuate FGC have the support of the whole community.

At a political level, Benin government through its Ministry of Family affairs committed to push for more impact and launch the “End Child Marriage now” campaign. In Benin, United Nations Fund for Population (UNFPA), United Nations Fund for Children (UNICEF), the Dutch Embassy and many national NGO’s and youth organizations are also playing a key role to promote girls rights and empowerment.  However, more commitment and action are needed from all stakeholders.

Let’s build strong and resilient community dialogues championed by vibrant advocates who can help to share a sustainable future for girls, for women, and for all. 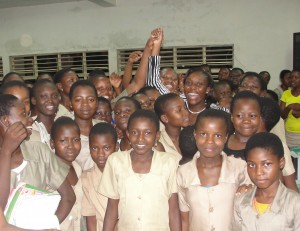 Dr Joannie BEWA is a medical doctor from Benin (West Africa) and the founder of the Young Beninese Leaders Association (YBLA). Since 2010, YBLA sensitised and trained 10,000 youth on HIV/AIDS prevention and sexual health through the “Red Ribbon Campaign”. In partnership with the First Lady Michelle Obama Young African Women Leaders Small Grant Program, YBLA empowered and trained more than 3000 girls and women through capacities building and mentoring. YBLA use social media, online campaign, capacity building and sports to address girl’s issues.  Joannie is a member of the UNFPA Youth Panel in Benin and the Partnership for Maternal, New born, Child Health (PMNCH) adolescent and youth constituency.