When it comes to working towards ending female genital cutting (FGC), we know that community-led change, focused on shifting social and gender norms that perpetuate the practice, is the most effective means of bringing about collective abandonment.

A deeply entrenched practice like FGC cannot be abandoned if whole communities, including men and boys, are not engaged in the process. Our partners in Kenya are making sure that is happening by creating space for dialogue and reflection between all community groups and providing them with the knowledge and tools they need to decide to end the practice for themselves.

Orchid Project has embarked on a 3 year consortium programme with the Coalition on Violence Against Women (COVAW), S.A.F.E. Kenya and their SAFE Maa and SAFE Samburu teams to accelerate an end to FGC within the Maasai and Samburu communities in Kenya. While there are many overlapping themes in the approaches consortium partners use, COVAW and S.A.F.E. Kenya each bring a uniqueness to the delivery of their work.

COVAW trains teams of community activists and key influencers to facilitate dialogue forums that engage women, men, boys and girls. They also successfully utilise radio programming to raise awareness on a mass scale about misconceptions around FGC and how it can end. SAFE Maa uses traditional Maasai song and dance to raise awareness about cutting and how it can end through live and filmed performance. With the support of the Loita cultural leaders, who have publicly blessed the Loita Rite of Passage (LRP) – a culturally relevant alternative to cutting – the SAFE Maa team facilitate community workshops with men, women and youth to support the uptake of the LRP. The work of the SAFE Maa team has resulted in the majority of the community supporting the movement towards FGC abandonment and the implementation of the LRP, and an estimated 30% of families are now graduating their girls to adulthood through this new ceremony.

Pursuing an opportunity for learning and collaboration

As part of the consortium programme SAFE Maa and COVAW recently participated in an exchange visit whereby Maggie Oyugi and James Wainaina, Programme Associates at COVAW, travelled from Narok North to visit the SAFE Maa team in the Loita Hills.

Both SAFE Maa and COVAW have used innovative strategies to adapt their community based work during COVID-19 to ensure national restrictions have been met and that crucial conversations on FGC can continue. The same measures had to apply during the COVAW team’s visit to Loita.

We talked to Maggie and James about their experience, and they gave us their thoughts on why such exchange visits are so important. “We want to further enrich COVAW’s expertise and approach to addressing gender-based violence. We also want to see how SAFE Maa engages with communities and raises awareness about FGC”, said Maggie.

“We hope that SAFE Maa will also be able to see for themselves, how COVAW is trying to accelerate the end of FGC and hopefully they can learn something from us as well”, James added.

Commenting on the visit, Amos Leuka, SAFE Maa Project Manager said, “COVAW’s visit really built the team’s morale because it made us remember that we are not alone and that there are others who believe, as we do, that change is coming. Maggie and James’s positive feedback on our approach and activities also gave me, and the whole team re-newed energy. We look forward to learning and engaging with them more in the future.” 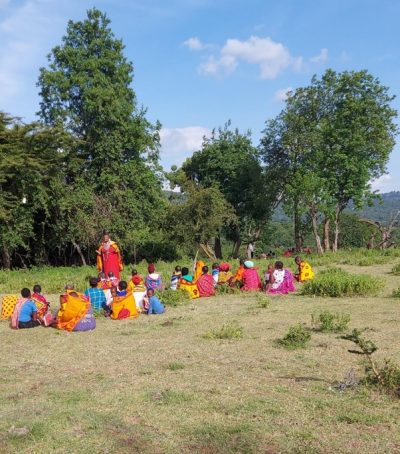 The COVAW team spent two days in Loita Hills. The first was dedicated to attending a workshop with men and women who gathered to share their opinions on the Loita Rite of Passage. James thought that the structure of the first day worked really well because it started in plenary where the topic was outlined, then men and women separated into two groups to discuss the topic in more detail. James participated in the men’s group and shared that “the men really wanted to understand how they could convince the entire community to abandon the cut and embrace change”.

The COVAW team found great value in observing how their peers at SAFE Maa effectively facilitated the workshops. “We were impressed by SAFE Maa’s participatory way of approaching conversations around FGC”, says James. “When the men are discussing these issues on their own as a group, they are more comfortable talking openly and without fear of judgement.”

Key to James was that both groups had this opportunity to come together at the end of the session and a representative summarised their discussion and action points, something that he would like to incorporate into COVAW’s workshops going forward. James spoke to the benefits of this as the person chosen had the group’s confidence to sensitively and accurately feedback their discussion, he emphasised “this way, everyone gets to be heard.”

On the second day, James and Maggie travelled to a nearby village to attend the second day of a women’s workshop to discuss their thoughts on how the LRP can be adopted by everyone in their community.

For the COVAW team, maintaining the continuity of the conversation goes a long way in making sure that issues around FGC remain front-of-mind for the communities. COVAW’s current community dialogue forums are 2-3 hours in length and large in numbers, whereas SAFE Maa holds fewer workshops but each session is between 1-2 days in length. COVAW saw value in extended sessions and Maggie and James are keen to share their learnings with their project team and consider how they can adapt activities to incorporate some of these elements.

At the end of the day, solutions must come from the community

SAFE Maa’s workshops are a series of ongoing conversations using non-judgemental open dialogue facilitated by local staff members who are from the community. Above all SAFE Maa’s approach is community led, working with the community to develop culturally relevant alternative solutions to cutting.

“What I also really appreciated is that when SAFE Maa holds these workshops, the team brings members of the community together to sit down and have a traditional meal. It’s a wonderful way of connecting with people and honouring their culture”, added Margaret.

The trip to Loita Hills showed the COVAW team that there are many commonalities in the way both organisations work; they both strive to ensure that change is community-led and locally owned and they are both very keen to learn from each other’s experiences in order to accelerate that change.

“The purpose of these workshops is to find solutions that can accelerate an end to FGC and it is absolutely imperative that those solutions come from the community. Only once they come together as a community to find the solution can they then together embrace it.”