From 25th November, the International Day for Elimination of Violence Against Women, until 10th December, Human Rights Day, people and organisations around the world will be taking action for the 16 Days of Activism against Gender-Based Violence. Led by UN Women, the 16 Days campaign highlights inequalities faced by a significant proportion of the world’s population, and not least an issue that impacts at least 200 million women worldwide; female genital cutting (FGC).

FGC is a practice involving the full or partial removal of a girl’s external genitals. It is a social norm and harmful practice that occurs in countries across Africa, the Middle East, Asia and within the global diaspora. The impacts of FGC are wide-ranging and can often last a lifetime. It can lead to severe complications including an inability to pass urine and menstrual blood, constant pain, difficult sexual intercourse, obstetric complications and in some cases even death at the time of the cut or from subsequent infection. FGC can also cut short a girl’s education, and in many communities has a strong link to child, early and forced marriage.

The effects of FGC significantly impact gender inequalities around the world, and limit the opportunities of so many women and girls globally. But FGC can end, and in many communities, it is already ending. We’ve put together 16 ways to end FGC; one for every day of activism, so people and organisations globally can take action towards a world free from the practice.

Like most things, ending FGC starts with you. While FGC is an under researched area, and experts and agencies are still working on finding out the scale and diversity of how, where, when and why it is practiced, there are many useful resources available. Orchid Project produces research and resources to give information on FGC in a range of settings. The UN Population Fund’s dashboard provides insight into prevalence rates in 17 African countries, while Orchid Project also provides country profiles on territories across the world.

Orchid Project is a UK-based NGO working to end FGC through advocacy and by working with partners in Kenya, Senegal and India. To learn about how we’re advocating for governments to prioritise ending FGC, the work of our inspiring partners, new research and how we’re sharing knowledge and best practice, follow Orchid Project on Twitter, Facebook, LinkedIn and Instagram.

As part of supporting community-led approaches, Orchid Project works with grassroots organisations who understand local contexts and are part of the communities they are working within. Orchid Project and our programme partners all believe that ultimately, a community must decide to collectively abandon the practice of FGC, in order for everyone involved to understand that the practice must, and can end. It is essential that NGOs and governments support and work with grassroots organisations to bring about change. 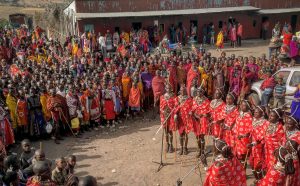 There are NGOs and charities around the world working to bring about a world free from FGC, many of which share regular updates about their work within communities. Orchid Project’s partner Tostan works in Senegal, S.A.F.E. work with Maasai communities in Kenya, while the Coalition on Violence Against Women and Education Center For The Advancement Of Women also work in Kenya to bring about abandonment of FGC. Orchid’s partner Sahiyo is also working within the Dawoodi Bohra community in India, Pakistan, and with the global diaspora to bring the practice to an end.

From the UK, The Girl Generation works with partners across 10 countries in Africa. FORWARD is another UK-based charity working within Africa as well as with diaspora, while 28 Too Many carry out research, influence policy and legislation, and equip local organisations. Stay informed of all the fantastic work that is being carried out by these and many other inspiring organisations by signing up to receive their updates or checking out their websites. You can also sign up to receive updates from Orchid Project.

Social media is a powerful tool for change, and with more than 3 billion users around the world it provides a significant opportunity to share and spread messages and galvanise people into action. Share this blog with your networks on Facebook, Twitter, and LinkedIn to both raise awareness around FGC, and encourage others to act. 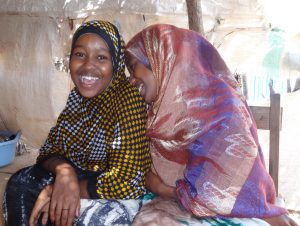 Orchid Project has seen the change that can happen through non-judgemental approaches within communities that practice FGC. Many countries have passed legislation that makes FGC illegal, and while it is important that governments are committed to ending harmful practices, it is absolutely vital that communities take the lead in this change. It is difficult for one family, or one person, to decide to abandon FGC for risk of social sanctions.

For a community to abandon, there must be a collective process of deliberation, often followed by a public declaration. Orchid’s partner Tostan have been part of incredible change over the past two decades, with nearly 9,000 communities across West Africa declaring that they are abandoning FGC. As an individual or organisation, supporting and fostering community-led approaches can significantly contribute to an end to FGC.

Hashtags can amplify messages, provide a space for discussion and raise awareness around an issue. Showing your support for ending FGC by using relevant hashtags, and jumping on #16Days will spread the word and mean more people will have awareness around FGC, so they can support, donate, and take action to bring about a sustainable end to the practice.

It is crucial for men and boys to be allies in ending FGC, particularly in communities and societies where the views and decisions of male traditional leaders, elders, religious leaders, and local and national government officials hold great weight. Research has shown that women and girls’ often have misconceptions around men and boys’ support for FGC.

For example in Somaliland, Orchid Project’s research with Somaliland Family Health Association, Norad and Population Council found that 89% of men want to abandon the pharonic cut (WHO FGC type III (infibulation)), in comparison to 73% of women. With many communities continuing the practice as a socially expected part of a girl’s graduation into womanhood, and often in preparation for marriage, it is vital that men and boys speak up to end FGC. One inspiring example of this, and the impact it can have, is young male Maasai warriors, the Morans, going on awareness-raising performance tours with SAFE Maa, to break the silence around FGC. Encouraging men and boys to be part of ending FGC is of great importance to the success of this movement. 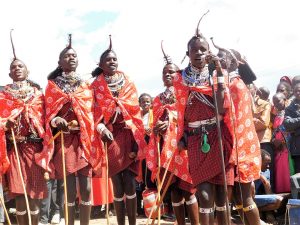 In many communities, discussing FGC is a taboo. However, there are examples of how, through open dialogue, communities have broken the silence around the practice. FGC is a social norm held in place by whole communities, and we’ve seen through our partner Tostan’s work in West Africa, that when discussions take place within communities around the issues relating to FGC, change can happen. Open dialogue is just one part of an enabling environment that can lead to a community’s choice to abandon FGC.

With so much impactful work being carried out in communities and countries around the world, it is vital to share knowledge, research and best practice to accelerate and catalyse an end to FGC. With our partners in Kenya, Orchid Project runs Knowledge Sharing Workshops so staff from local NGOs and civil society can learn what works from each other, and share their experiences working within communities. This model of sharing knowledge is extending to other countries, with a KSW planned in Somaliland in December, and staff from organisations in Tanzania also participating in Orchid Project’s workshops. If you work within the sector, you can reach out to other organisations to share best practice and learn, and if you’re an individual you can share research, case studies and blogs to showcase the progress that is being made. 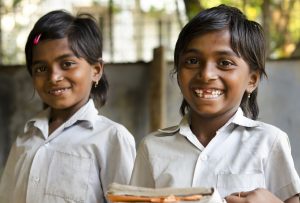 Our work would not be possible without the help of our supporters, donors and community fundraising. From music events, bake sales and theatre productions to art installations, triathlons and 10k races, we’ve received the support of some amazing, committed groups and individuals. Get inspired with ideas for an event or fundraising initiative that you can hold, or if you already have an idea, please get in touch.

It takes work and dialogue at all levels to bring about change. Community members (including elders, traditional and religious leaders, youth, men and women), governments, NGOs and civil society must be involved to bring about an enabling environment tor FGC to end. For this to happen, there needs to be wider awareness of the issue itself and its scale and impact. Awareness leads to a better understanding of the practice, and a realisation that FGC needs to end. In turn all stakeholders contribute to an environment and a movement that allows for the changes and progress needed in order to bring about an end to FGC. 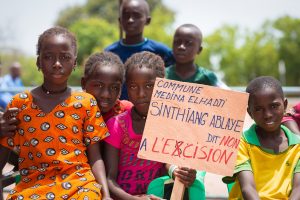 It’s essential that the voices of women and girls who are impacted by FGC are central to bringing the practice to an end. Over 200 million women and girls worldwide are affected by FGC, in at least 45 countries. 3.6 million girls are at risk of being cut within the next year. In communications about FGC, women and girls’ voices must be raised to inform decision making at all levels and to raise awareness of people everywhere from those who live with the impacts of the practice. Ensure that when you’re discussing FGC, sharing information and knowledge, that you are doing no harm, and that women and girls’ perspectives are front and centre.

For FGC to end, there must be an enabling environment in place, so that communities can decide to abandon the practice. Human rights-based educational programmes including information on health and equal rights for women and men can open up space for discussion on FGC. This type of holistic approach, where human rights are a focus, can often lead to communities taking the decision to abandon the practice. Organisations working within communities can take this type of approach, or as an individual you can support organisations taking holistic approaches by donating, raising money or sharing information. 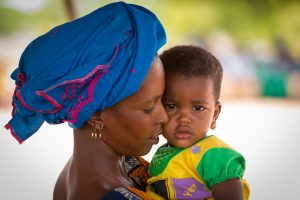 Focusing on the positive changes that are happening in many regions can spark progress in other areas. By using media creatively, journalists, writers, bloggers, filmmakers, broadcasters and media professionals can help to spread the word about FGC abandonment. The media landscape in which this message needs to be communicated is diverse; from rural areas with little to no media at all, to urban areas with greater media penetration of all kinds.

There have been great examples of different media approaches to reaching specific audiences. For example, in Gambia, radio shows have been used to host live phone-in radio programmes about FGC, while in Senegal a social media campaign #TouchePasAmaSoeur (Don’t Touch My Sister) was conducted across regions with a high FGC prevalence. These messages across different types of media that are right for a specific context aim to galvanise a new social norm so girls remain uncut. You can contribute to this by sharing the message of FGC abandonment in your region through channels that are most relevant to your community.

Due to the generous donations of our gracious and committed supporters, Orchid Project is proud to have achieved a considerable amount since we were set up in 2011. We continue to ensure FGC is on the global agenda through our advocacy work, share best practice and knowledge, and work with partners and communities towards FGC abandonment.

At least 3.6 million girls are currently at risk of being cut within the next year. Please donate and enable us to continue this work, so we can bring about a world free from FGC.