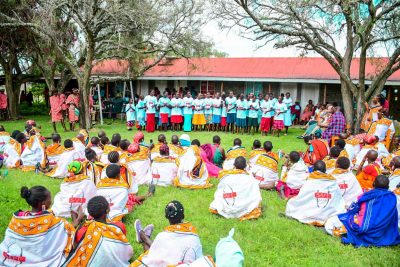 S.A.F.E.’s Female Genital Cutting (FGC) abandonment project has been running since 2010. Starting in the Loita Hills, it has been replicated across four different communities in Narok and Samburu Counties. S.A.F.E.’s programme is implemented in rural, hard to reach and underserved communities. It is these communities where the rates of FGC are considerably higher than the national average, and the county average. This is due to the interlocking factors of low levels of education, strong cultural heritage and identity associated with FGC, and a lack of exposure to anti-FGC campaigns.  In addition, the communities that we work with in Narok boarder Tanzanian communities where there is much less regulation of the practice. This puts girls and women at risk of cross-border cutting, a trend which has been observed in border villages.

S.A.F.E. use a mixture of traditional performance, community workshops, youth activities and cultural leadership engagement to support communities move to abandonment of FGC. The project is aimed at gaining whole community support for FGC, and empowering girls and women to make informed and healthy choices about the rite of passage that they pass through to adulthood.

S.A.F.E. is in the final year of a three-year project which is funded by the Human Dignity Foundation and is being delivered in partnership with the Orchid Project and the Coalition on Violence Against Women (COVAW). S.A.F.E.’s areas of focus for this project have been:

COVAW is a national non-profit women’s rights organization that was established in 1995 to respond to the silence of the Kenyan society in addressing Violence Against Women and Girls (VAWG). Currently, COVAW focuses on five strategic areas as informed by its Strategic Plan 2018-2023, namely Access to Comprehensive SRHR and SGBV services, Access to Justice, Women’s Economic Empowerment, Women’s Leadership Development and Institutional Development. COVAW Strategic Plan 2018-2023  https://covaw.or.ke/wp-content/uploads/2018/09/COVAW-Strategic-Plan-2018-2023-Full-Version.pdf . COVAW’s vision is a society where women and girls enjoy equal rights, freedoms and thrive in safe spaces. COVAW’s mission is to champion the rights of women and girls to be free from all forms of violence.

About the HDF Project

The ‘Accelerate an end to Female Genital Cutting (FGC) amongst the Maasai and Samburu communities in Kenya’ project is focused on reducing FGC prevalence across all 6 sub-counties in Narok including Loita Hills. Through a combination of community dialogue forums engaging the whole community in discussion about how FGC can end, complemented by radio shows to raise awareness of FGC. The implementing partners i.e. COVAW, Orchid Project and SAFE Maa are committed to reducing FGC prevalence rates within the Maasai and Samburu communities by 10-19% points by April 2023. COVAW is implementing the project in 18 areas across Narok County.

COVAW’s interventions deliberately addresses social norms, attitudes, laws, policies and practices that negatively and disproportionately affects women and girls’ wellbeing. This includes the harmful cultural practices of FGM and early marriages. COVAW has so far reached 2,712 boys and 3,804 girls with key messages on effects of FGC, cost implications of FGC, social norms and FGC being a negative social norm, human rights and the anti-FGC legal framework and Alternative Rites of Passage as a viable option to replace the cut.

COVAW is currently working with 18 anti-FGC school clubs across Narok County. Each club has about 35-40 members who include both girls and boys. The anti-FGC club meets at least once in a month and the club meetings are facilitated by the trained anti-FGC champions who are mostly the guidance and counselling teachers. Peer to peer learning is happening where anti-FGC club members are reaching out to their peers and passing information on FGC abandonment. Survivors of FGC who are part of the anti-FGC club are opening up and sharing experiences on FGC while influencing others to say no to the cut. The anti-FGC club members have found creative ways of passing information including through skits, drama and poems which are often presented during parent’s meetings.

“I am a survivor of FGC. The anti-FGC school club meetings have created a non-judgmental safe space for us to share experiences. Teacher Prisca has been instrumental in my healing journey. She has encouraged me to share my experience on FGC while speaking out against the practice. I would not wish any girl to go through the pain and trauma that I underwent. I urge my fellow girls to be bold and say no to the cut,’’ Salome*, anti-FGC club member from Emurutoto Primary in Transmara West during anti-FGC club meeting.

“COVAW has empowered us with knowledge on the effects of FGC and human rights. I am now bold and committed. I will stand for my right to remain uncut,’’ Cherono from Olmekenyu Primary School during anti-FGC club meeting.