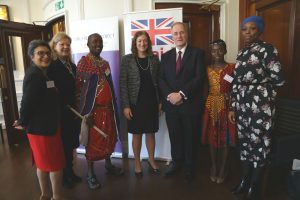 2018’s International Day to End Female Genital Cutting (FGC) has seen a broad spectrum of fantastic work being showcased across the global movement. From Kenya’s first ever national anti-FGC conference at the Kenya Institute of Curriculum Development, to the amplification of FGC survivors’ stories from India through Orchid Project’s partner Sahiyo. We are delighted to be part of such passion and determination across the movement, and from around the world.

In London, Orchid Project coalesced the efforts of two governments: the United Kingdom, which has been at the forefront of supporting efforts to end FGC, and Canada, which this week announced its first investment into a programme focusing on FGC. Canada has committed $3 million to support a northern Benin-based project to reduce the practice, as well as other forms of gender-based violence. At an event co-hosted by Orchid Project, the High Commission of Canada to the United Kingdom and the UK Department for International Development (DFID), we brought leaders together at Canada House from across the FGC and international development sectors, civil society, academia, the media, and the private sector.

We were graciously hosted by HE Janice Charette, High Commissioner for Canada to the UK, who welcomed our speakers and panellists, and applauded both Prime Minister May and Prime Minister Trudeau for their joint commitment to tackle global gender inequality, which was announced in Autumn 2017. The High Commissioner commented that this event to mark the International Day to End FGC 2018, in partnership with Orchid Project, was “a symbol of [Canada and the UK’s] shared commitment.” 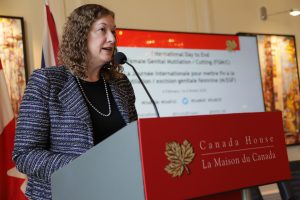 Opening the speeches, Canada’s Associate Deputy Minister of Foreign Affairs, Diane Jacovella, said that Canada is committed to ending FGC, and that the global community needs a “collective, comprehensive, and transformative approach,” which “must include leadership and action from government and from those who are affected.” Continuing, Ms. Jacovella said: “It also needs to be framed in a broader agenda that recognises that gender equality, the empowerment of women and girls, and respect for the human rights of women and girls are critical to ending poverty and entering a more peaceful, inclusive and prosperous world.” She noted that this ethos is at the core of Canada’s new Feminist International Assistance Policy. 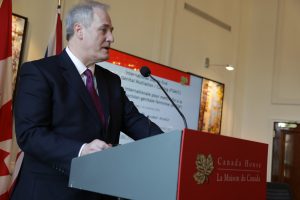 s, Minister of State for International Development for the UK, followed Ms. Jacovella at the lectern, saying that FGC is a practice that must come to an end. He confirmed that the UK’s commitment to supporting programmes to reduce FGC in traditionally practicing countries will continue into the future. Commenting on how change must happen as a legacy for the 200 million women and girls who’ve undergone FGC globally, Lord Bates said: “We owe it to each of these women and to the next generation to do better, and we believe that we will, because we can see the change happening.”

The audience then heard from a panel of inspiring changemakers, who are working at the grassroots and campaigning for an end to FGC and who are already seeing change: Jay K. Frederick, who is an Orchid Project ambassador, anti-FGC activist and Founder of SKiM Network; Amos Leuka, Project Manager for Orchid Project partner, SAFE Maa which works within the Maasai in Kenya; and Natalie Robi Tingo, the Founder of Msichana Empowerment Kuria and a participant in an Orchid Project Knowledge Sharing Workshop in Kenya 2017.

Julia Lalla-Maharajh OBE, Orchid Project’s CEO, opened the panel by pointing to the global nature of FGC, which is demonstrated by new figures released by UNFPA on Monday 5th February 2018. She said: “Between 2015 and 2030, in Indonesia alone, 15 million girls will be cut. The reason I’m highlighting that figure is because this is so much more than an African issue. This is a global issue. I want to know how, together, we can all work so those figures don’t become a reality. We have a choice, and that choice is now.”

Orchid Project is delighted to be working alongside Amos and Natalie and to talk about how change is happening in relation to FGC through their grassroots work in Kenya, and with Jay to share her vital campaigning work, as well as her knowledge and insight around FGC. 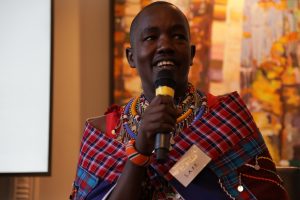 Amos Leuka told the audience at Canada House about his experience visiting Orchid Project’s partner, Tostan, in Senegal: “I went to Senegal to share what I know and also to learn from them. We learnt a lot on non-judgemental approach and social norms approach in delivering the message to the people. I see that it can work in my community, because the Maasai people believe in their culture and working in a social norms approach will help them to shift from cutting to not cutting.” He added: “We have to work hard to ensure it ends in our generation. The gift that we shall give to future generations is a world free of FGC.” 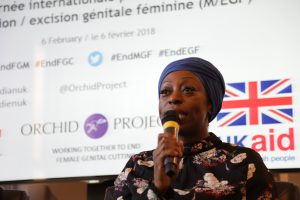 Jay K. Frederick added: “I’m the past, but there’s definitely a future without FGC, and it excites me to no end. We still have to be vigilant, because there are many countries that don’t put young girls, young babies at the forefront. Our job is to protect young girls. Protect them.”

Natalie Robi Tingo, whose organisation Msichana Empowerment Kuria focuses on youth in Kenya, said: “I’m an example of what ending FGC would look like, because I’m now meaningfully contributing towards the development of my community and country. And I can only imagine how it would look like if all girls were safe from the cut. We’ll be talking about leaders, business people, changemakers. We’ll be talking about a better world.” 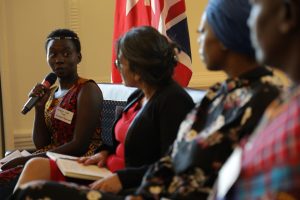 Orchid Project is proud to be supporting and working with committed, passionate and determined advocates like Natalie, Amos and Jay, and we look forward to working alongside both the UK and Canadian governments as they move forward to fulfil their commitments to end FGC.

Watch highlights from the event >