The Honourable Marie-Claude Bibeau, Minister for International Development and La Francophonie gave a powerful speech as Guest of Honour at the event, sharing a strong national commitment to end FGC.   Minister Bibeau stressed that ‘raising awareness of—and putting an end to female genital mutilation/cutting —is key for empowering women and girls and ensuring their human rights.’

Recent international efforts to end the practice are strengthened by its inclusion within the Sustainable Development Goals.  Minister Bibeau explained that ‘FGM/C is driven by gender inequality and deeply rooted in harmful social norms.’

Throughout her speech she reiterated the importance of collective and transformative approaches necessary to end the practice, calling on Canadians from every sector to increase efforts to prioritise an end to FGC both internationally and domestically. ‘We cannot hide, avoid, or retreat’ she said.

The audience included Parliamentarians, Government officials and activists all motivated to learn more about the practice. Over 200 million women and girls worldwide are living with the devastating effects of female genital cutting. It serves no medical purpose and results in severe physical, psychological and socio-economic impacts. FGC is a violation of women’s rights, child rights and human rights.

FGC is a global practice, it happens in 27 countries in Africa, throughout the Middle East and Asia, and in Australia, Canada, the U.S and the UK. Official statistics now confirm that 49% of girls under the age of 11 are cut in Indonesia (Unicef, 2016). During the event Islamic Relief Canada presented their new report on FGC in Indonesia. 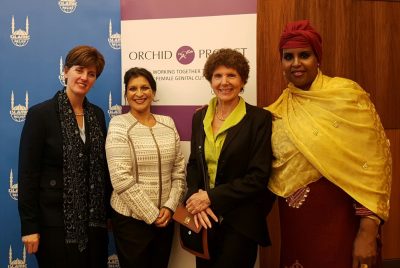 British Somali activist, Hibo Wardere shared her personal experience of undergoing FGC at a young age. She touched upon the harsh realities felt everyday as a consequence of being forcibly cut.

Orchid Project’s CEO and Founder, Julia Lalla-Maharajh reminded that FGC is ending. Communities are coming together to collectively abandon the practice. Change is happening, but there is an urgent need for more to be done.

To quote Minister Bibeau, ‘we must put an end to female genital mutilation/cutting. We must. For those 200 million girls.’

Find out more about how Orchid Project is working to end female genital cutting.