On November 13th 2014, the Kurdish and Middle Eastern Women Organisation (KMEWO) held an event to promote their campaign titled ‘The Campaign: Stop FGM in Iraqi Kurdistan’. The event was held in correspondence with their annual general meeting, as KMEWO  sought to bring together an array of people to discuss FGC in Iraqi Kurdistan.

Active since 1999, KMEWO seeks to promote issues that affect women, in particular regarding FGC; child and early forced marriage; honour killings, and domestic violence. They provide advice, hold education courses to teach women English and human rights, advocate to the government through lobbying and campaigning, and hold FGC awareness workshops across London. ‘The Campaign: Stop FGM in Iraqi Kurdistan’ is therefore only a branch of KMEWO’s work, however in the era of growing knowledge and awareness to FGC, they have decided to focus on gaining a deeper understanding of the practice. They subsequently held this event to share their knowledge and actively promote discussions on FGC in Iraqi-Kurdistan.

FGC in Iraqi Kurdistan has long been a taboo, however a multitude of organisations have brought the issue into the public domain, which subsequently led to the UN Assistance Mission for Iraq and UNICEF’s involvement. In 2011, the Kurdistan Regional Government (the official ruling body of the predominantly Kurdish region of Northern Iraq) adopted a comprehensive law against FGC and many other forms of violence against women and children. Whilst this was a landmark bill, it is seldom implemented and therefore KMEWO is now focusing on the implementation of the law in Iraqi Kurdistan. The outline above was given as an introduction to the event, and was followed by the screening of the BBC documentary ‘A Handful of Ash’.

A ‘Handful of Ash’ documents many women and girls in rural Iraqi-Kurdistan who have either undergone or avoided FGC. It was made by filmmaker Nabaz Ahmed from 2004 to 2011, and only shows a particular vision of Kurdistan through filming primarily in the barren desert and with the poorest of the population. Despite this, the film does reveal many things about Iraqi Kurdistan that were perhaps unknown prior to the release of the documentary; and therefore whilst it has its flaws, the documentary is informative. Central to the film was the emphasis on facts, such as how the majority of Kurdish girls are cut before the age of 5 and how in Iraqi Kurdistan the people call FGC ‘hatana’ rather than cutting. The central reason that seeks to justify FGC in Iraqi Kurdistan is religion, as they believe that the Koran indicates that girls must be pure and clean, and this is achieved through ‘hatana’. The film closes with a discussion of the law in Iraqi Kurdistan, and how only one person has been taken to court with this law. FGC is now no longer a taboo in Iraqi Kurdistan, but people seldom talk publicly about FGC as they fear being prosecuted. 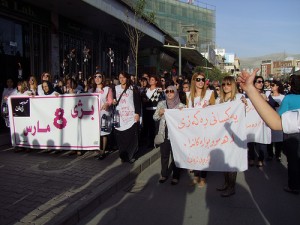 After the film, KMEWO introduced their special guest, Falah Shakaram. Falah currently works as the Association for Crisis Assistance & Solidarity Development Co-operation for WADI, a joint Iraqi-German initiative in Kurdistan. He is a leading member of the anti-FGC campaign in Iraqi Kurdistan, and at present focuses the majority of his time managing a women’s shelter and a radio station for women and the youth. Falah discussed the history of WADI’s research in Iraqi Kurdistan and their many challenges in both undertaking and publishing their research. Falah finished his presentation with a picture of his daughter, and claimed the central reason he has tried so hard to abandon FGC in Iraqi Kurdistan is so his daughter does not have to undergo it. Naturally this touched everyone in the room, and really emphasised the personal commitment Falah has to FGC, and the consequences of FGC.

The event then closed with the introduction of lunch, and Falah made his way to the Orchid office for a meeting with us to discuss WADI’s work and future projects by Orchid and WADI. It was good to speak to Falah, and at the office he delved further into the challenges he faces as a researcher, a lawyer and a father in Iraqi Kurdistan through his active campaigning, and how this does not deter him from pursuing the dream of an FGC-free Iraqi Kurdistan state. However, despite the challenges of hostility, with Falah’s enthusiasm and effective community empowerment programmes we all believe an FGC-free Iraqi Kurdistan is absolutely possible.

Iraqi Kurdistan at the FOKO event in Copenhagen

In addition to the KMEWO event, FGC in Iraqi Kurdistan was mentioned at the bi-Annual FOKO meeting held in Copenhagen on November 12th; where Vanja Berggren and Bayan Nasih, from Lӓnsstyrelsen Ӧstergӧtland, presented on the Swedish government’s mission to elucidate FGC in Sweden from the perspective of the girl child and the youth. During their research they conducted field trips to different countries and among these was Iraqi Kurdistan. Vanja presented on her visit to WADI and Bayan, also of Kurdish origin, spoke of the practice in Kurdistan and her experience with FGC in Kurdish communities in Sweden.

Another study on Kurdish migrants presented at the FOKO meeting was conducted by Mimmi Kokkula, a BA student from Tampere University, Finland, and was presented by Reija Klemetti. The study on FGC among women of Somali and Kurdish origin in 2010-2012 in Finland found that the prevalence rate of FGC was 30% among Kurdish women. The study found that FGC in Finland was more common than previously estimated, especially in regards to women of Kurdish origin. Their sample included 224 Kurdish women that were randomly selected from the National Population Register and the data was taken from the Migrant Health and Wellbeing Study. The Finnish population of 5.4 million is pretty homogeneous, around 8 300 women in Finland come from countries where FGC is practiced.

Ingvild Lunde, from the Norwegian Knowledge Centre for Violence and Traumatic Stress, presented her research proposal on “Female Genital Cutting among Kurdish migrants in Norway”. As the study is in a preliminary stage Lunde presented mostly on the custom in Kurdistan and her methodology, which follows an explorative and flexible design based on qualitative research methods. Although Kurdish migrants are the second largest group of migrants from countries practicing FGC in Norway, there is little research or information on the custom among Kurdish migrants. Lunde started her research in August as part of her PhD and it is proposed to end May 2007. We are very much looking forward to reading her finished paper.