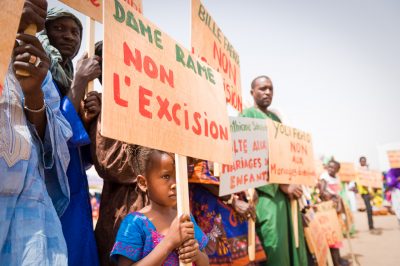 The terminology around the issue of female genital cutting (FGC) can be challenging. Three separate terms have been widely used to describe the practice: female circumcision, female genital mutilation, and female genital cutting. Tostan avoid the term “circumcision,” as we believe it incorrectly implies a parallel between FGC and male circumcision.  But the fact is, all of these terms have their limitations and fall short of accurately describing the practice—which has four major (and infinite minor) variations in practice around the world. No one term is truly “accurate.”

But we must use words, and so among these options, Tostan has chosen the term female genital cutting, based on what communities that are giving up the practice have told us: the term “cutting” allows them to accomplish more than the others because it is less judgmental and value-laden. As a result, the term is more effective for engaging groups in dialogue around this practice, and eventually bringing about its end.

We want to be clear about one thing: we do not use this term in an attempt to excuse or diminish the impact of the practice. Anyone who has learnt about Tostan and watched the testimonies given by Tostan’s local partners knows that we are in no way hiding or excusing the real, significant consequences of this practice. Yet despite its serious health consequences, we have found that FGC itself is not done with vicious intent to “mutilate” a girl. Rather, parents who have their daughters cut want the best for them, and the practice is seen as a necessary step to enable her to be a fully accepted member of the community.

It seems counter-intuitive, but in our experience, if there is a dominant emotion involved in FGC, it is love—because not cutting your daughter risks her entire future. As explained by a former cutter-turned-Tostan advocate, Oureye Sall, in communities where FGC is practiced, an uncut girl is ostracized. Community members will not eat food cooked by a woman who is not cut, will not accept water from her, will not even sit with her. She will have difficulty getting married. An uncut woman is viewed as unclean and therefore unable to participate fully in the community.

With these social pressures, if a family chooses not to cut their daughter, they have risked severely damaging her social status. To imply that parents are actually “mutilating” their daughters through a decision made with love and concern for her well-being is unfair to them and risks alienating and offending them rather than convincing them to abandon the practice.

In addition, we have found that many communities do not fully understand the consequences of the practice—the effects of which are not always immediate or obvious, especially in cases of infections, tetanus, etc. Without an understanding of concepts such as germ theory, recognizing the true long-term health implications of FGC is difficult. When communities do get access to this information, presented in a manner that is trustworthy and non-combative, they come to understand the harm the practice causes and will often decide on their own to stop—but if the person bringing these messages begins with judgmental terms, the chance of reaching this breakthrough disappears.

We should remember that all of us, no matter where we are from, tend to greet judgmental outsiders in similar ways. When our beliefs and actions are challenged or condemned by a stranger, we are likely to become defensive; rather than taking their concerns to heart, we view their accusation as an unwarranted and uninformed attack on our character. We certainly won’t feel inclined to change in order to satisfy this judgmental critic; we may even respond by holding on more tightly to the belief or action being questioned. Our experience has shown us that it is dialogue and discussion that leads to change, and dialogue requires a relationship of trust and respect. But calling the practice “mutilation” prevents this relationship from developing and invites defensiveness rather than productive discourse.

And, if we take the example of Oureye Sall—who transformed her experience as a former cutter into a source of leadership against FGC—it becomes clear that we must avoid demonizing those who perform the practice. Oureye is not a “mutilator” and villain; she is a hero driven by her new knowledge. When she used to cut girls, she did so because the experience and knowledge available to her told her it was right to do so. When she decided to stop and to become a champion of the movement to abandon FGC, it was because new experiences and new knowledge showed her that the practice was harmful and that change was necessary. Tostan’s experience has shown this to be the case for almost all cutters; they are not evil, they do not seek to “mutilate” girls or bring them harm, but rather they are acting based on what they believe is right.

Perhaps most importantly, we should be very cautious in labeling and stigmatizing the girls and women who have been cut. We do not believe it is our place to tell them that they are “mutilated.” As with other victims of violence, we believe they have the human right to self-identify in whatever manner they choose. Some prefer to call themselves mutilated, others simply “cut,” many others say less, or nothing, as they are not yet comfortable being public about this very private matter. We believe women should be free to choose the term that best defines them, and that the term “mutilated” should not be forced upon them.

In short, our use of the term “FGC” is not apology, nor is it political correctness. It is simple practicality: this way of speaking opens doors to dialogue that have led to thousands of communities standing up to abandon this practice, doors that more accusatory language would keep shut. We choose to use language that has proven to be effective, that community leaders and evaluation data alike are telling us brings real, concrete change.

In keeping with the above approach, we are not saying this in any effort to pick a fight with others who choose to use different language. We respect the many differences of opinion on this truly complex subject and the language that accompanies it. We do encourage others to study our experiences, both in relation to FGC and the many, many other areas on which our program works. We hope to continue supporting community-led work in the field to ensure all girls—cut and uncut—have human dignity. These actions are our main focus, and we believe they speak much louder than words.