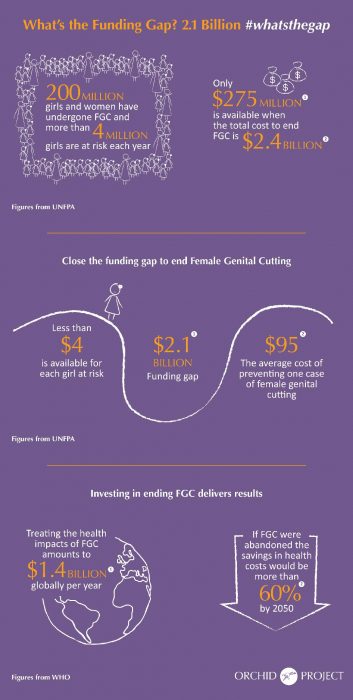 We launched our global campaign ‘What’s the Gap?’ on the 15th November at the start of the 16 days of activism 2021. It will run to Zero Tolerance for Female Genital Mutilation day on the 6th February 2022 and beyond. The aim of the campaign is to highlight the real funding gap in development assistance for ending female genital mutilation.

Just before Christmas the UNFPA- UNICEF launched the theme for Zero Tolerance day as ‘Accelerating Investment to End Female Genital Mutilation’  #investdontrest – adding that ‘if global efforts are not significantly scaled up, the number of girls at risk of being subjected to FGM will be higher in 2030 than it is today’. The mirroring of our campaigns means that this is an burning issue which all of us need to highlight globally in order to bring about the end of female genital cutting.

Our partners and community organisations know better than anyone the affect that a lack of funding has not only for the impact you can have at community level but for the movement to end Female Genital Cutting or mutilation as a whole.

We are asking for videos from different organisations working to end FGC to say how much of an impact the lack of development assistance funding has on our sector. We want as many people as possible to make videos saying which open with ‘ what’s the gap?’ and then a 1 minute or less answer which highlights how better funding would improve your ability to make change and end FGC.

All you need is your phone

And you have the equipment needed to make a video. We would like you to film yourself for 1 minute or less talking about what your organisation would do if it were better funded.

Please ask yourself out loud the question ‘What’s the Gap?’ on the video

Then answer with whatever you feel is the greatest funding gap and what better funding could do for your organisation.

It could be you in a quiet room with someone filming you head-on (or your phone balanced on some books at face level so that the angle is straight on to your face). We would also be happy if you filmed yourself ( or someone else filmed you) walking through your community as a more action documentary style commentary. It’s up to you. We don’t want to be too prescriptive but just remember that we would like to be able to hear your voice properly. You could also decide to have two people from your organisation in the same video but remember that we have to keep it to a minute or less so that we can put it out on the different social media platforms. Send to us via sophie@orchidproject.org