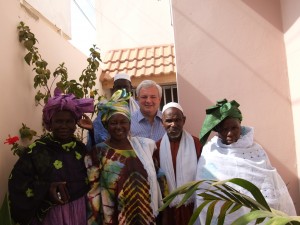 This morning, we welcomed the Rt Hon Stephen O’Brien MP to Tostan’s offices in Dakar in Senegal. He is pictured here with community members who told him in eloquent and articulate terms how it is possible to end female genital cutting.

Duusu pictured second left in the photograph talked about the Tostan approach and how participants in their respectful community empowerment programmes learn about their human rights.  She outlined all of the things that communities learn: to read and write, about health issues,  income generating activities and how to manage them. Her village had identified the need for a health hut and built and stocked it themselves. She also told the minister that she is now a solar engineer who installed solar power in her village whilst training others in her community.

But most of all, she emphasised that villagers now understood that they had a right to be free from all forms of violence. They also know that they have a responsibility to uphold this right – that no one should harm or be harmed. This was the first step in understanding why FGC should be ended. 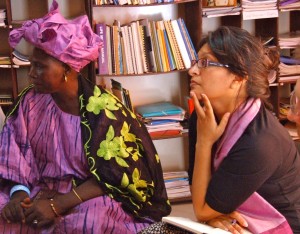 Marietou then talked about “the tradition” – which is how she refers to FGC. She said that she had had many problems as a direct result of FGC. “Really, I have had many horrible things happen.”

Marietou outlined her story and told of her two daughters who died from the practice. She spoke with such dignity and halfway through her testimony, she started to cry with the memory of the moment. I was sitting next to her and found my emotions hard to keep in check. This is the first meeting Ministerial meeting that I have participated in, where I have been in tears. For those who would like to learn more, I would encourage you to watch Marietou telling her story in full here to Molly Melching.

In spite of how greatly Marietou was affected, when Demba Diawara (see below) came to her village to start discussing FGC with other villagers, she walked away. The tradition was so strong that she was unable to question it. Three times, she and others refused to listen to Demba. 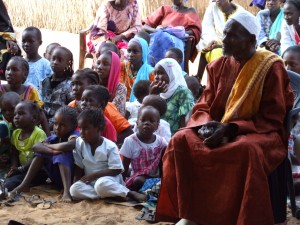 Demba spoke about social networks and how when the villagers from Malicounda Bambara first came to him to say that they were having difficulty having chosen to stand up and abandon on their own, he realised that he had to reach out to his “wider family.” It transpires that this is really a very wide family! Family members link through different villages right across Senegal, but in the first instance, he “put on his shoes” and walked to 12 other villages. On 14 February 1998, the first community declaration was held.

Molly Melching, Founder of Tostan (pictured below with the Minister) told of how it was really that first village of Malicounda Bambara, but also Demba’s wisdom and that of other community members that allowed Tostan to understand how to really spread the abandonment of FGC – which now has led to over 6,200 communities choosing not to cut their daughters. It is entirely possible that Senegal could have ended this practice completely by 2015. 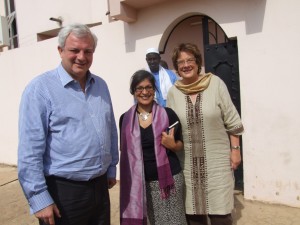 Oureye (pronounced Wari) opened her discussion by saying: “I was the one who practised cutting. It was the only job I knew.” She went on to outline that it was only once she had participated in the Tostan programme that she realised the real consequences. She learnt about germs: that they are invisible and that they are transmitted; she learnt that tetanus is a killer and that it was not the spirits that were causing girls to die.

Oureye had never had any formal education. She was married at the age of 14 to a man who was 55. Her only income had come from FGC. When she realised the harm she was doing, she decided that “peace and wellbeing of girls was more important.”

She also went to her imam and asked if religion said that FGC was required. The imam answered that: “Around you are many Wolof communities. They are religious people. Yet they do not practise FGC. What do you think?”  From this, Oureye realised that religion did not play a part in FGC.

Overall, we hope that the Minister was impressed by his visit. We believe that our group represented the most important voices, those of the community. From my part, as a representative of a UK NGO and as a British citizen, I was quietly delighted that our political representative was able to listen to such an important message, in such a positive way.

We look forward to all working together towards an end to female genital cutting and making connections like these, I hope, are one of the respectful ways we can do this.